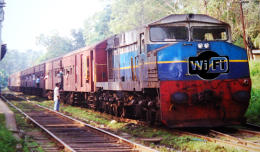 Free, public Wi-Fi was part of President Maithripala Sirisena’s manifesto. Everyone assumed this promise was thrown in because the people who wrote the manifesto kept pounding the tables and shouting “More! More! We need more ammo!”.

Until, of course, the Department of Railways put out word that yes, they would actually provide free Wi-Fi as a 100 select railway stations. Not quite the city-wide WiFi network that some may have envisioned, but definitely a welcome announcement. However, we must ask: how will this work out?

The trouble with Wi-Fi

There are only two providers that seem capable of providing public Wi-Fi (and have done so): SLT and Dialog. Dialog has its network of some 2500 paid WiFi hotspots for Dialog subscribers. This hasn’t exactly worked out – the hotspots seem to have racked up a reputation for being wildly inconsistent in service and uptime.

How is SLT doing? They set up free Wi-Fi at Majestic City, Colombo, setting up multiple access points (presumably for the different floors). And that, so far, has been just hideous. Data speeds are slower than an arthritic turtle, access points wink out and reappear, and on the whole, most people would rather use data. SLT being the national carrier, we can safely assume they’re the ones who are going to set this up.

Firstly, there is the issue of bandwidth.

Picture a 16Mbps connection. Since 16 Megabits per second is actually 2 Megabytes per second, that line can only pipe in a theoretical maximum of 2 Megabytes every second. Practically, it’s less.

Of course, this can be solved by throwing more line capacity at it. And then it’s a matter of time before someone figures out that the Fort Railway Station has really good Wi-Fi and that you can just sit there and torrent the new season of Top Gear. Whoops.

The second issue is not that simple: it’s the problem of interference.

Modern Wi-Fi uses a protocol called 802.11, which tries to prevent interference from corrupting data. When an 802.11 device detects interference, it holds off on transmitting data; and if interference makes it so that it doesn’t get an acknowledgement for the data packets it just transmitted, it will send another one. This works wonderfully for home Wi-Fi. But when you have a hundred sources of interference, the result is that data transfer just gives up and goes on strike.

So what generates interference? Why, other devices with Wi-Fi, of course. And microwave ovens. And Bluetooth. Even bad electrical connections. Because Wi-Fi, at the end of the day, is a radio signal, and if any thing can screw with it, it will. In fact, there’s a rule of thumb often quoted by networking professionals: you can have between 12 and 25 devices connected to a single Access Point, but more than that is just stretching it.

The obvious solution is to deploy more Access Points. Unfortunately, according to Cisco, you need to drop the transit signal power of each AP when you do this, because APs generate interference, too. Throwing more APs at a problem isn’t necessarily going to fix the issue – a dense network might just make it one huge pile of interference.

To quote Cisco: when it comes to interference, “you can run, but you can’t hide.”

Something tells me one of the two is happening at Majestic City, all day, everyday.

This can’t be an impossible problem

It’s not. Other countries are doing this, and these problems are being knocked over rapidly. Africa has free Wi-Fi in Johannesburg and Cape Town. Portions of India have free Wi-Fi, either through government provision or civic-minded corporates. Europe, Canada and the United States have lots of it. Punjab is planning to launch free Wi-Fi at hospital,s railways stations, airports, metro bus stands and select educational institutes, which sounds a plan Sri Lanka could follow.

Usually, these free Wi-Fi services have lower speeds compared to the average home connection, and often come with a data or a time cap. Perth, for example, offers free public Wi-Fi in a certain area, with a limit of 50MB per connection. Do your stuff, and then get out of the way; let the next user in.

Effective, intelligent limiting is one solution. Lots of bandwidth is the other. New York, for example has a plan called LinkNYC, where they’re replacing telephone boxes with giant consoles that provide free Wi-Fi, 24/7, “upto gigabit speeds”). It’s set to go by late 2015. LinkNYC involves, according to reports, some $200 million spend on fiber. And even so, each giant console has limitation: a radius of a 150 feet, a maximum of 256 devices connected to it, and a total speed of 1 Gbps, with design updates every four years.

Somehow, I doubt we have $200 million to throw around on Wi-Fi at train stations, so it comes down to having technically hamstrung connections. Or, this being Sri Lanka, and it being SLT, option no 3: Majestic City Wi-Fi, which means everybody can connect to it, but nobody can use it.