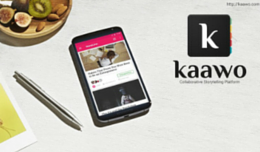 If there’s one thing the Sri Lanka IT industry is famous for it’s a long list of world-class achievements. As of this morning, we can add another one to that list. Kaawo by Mogo Solutions from Sri Lanka just became one of the finalists of The Global Mobile Innovators Tournament.

For those of you who are lost the Global Mobile Innovators Tournament is a competition organized by IBM in partnership with 4YFN (4 Years From Now) and four global telecommunications companies. This is a global competition that sees contestants from across the globe. Each of these contestants faces a tough battle because the competition consists of 15 virtual challenges, 5 regional demo days and one grand finale.

For those of you who’ve missed it, Kaawo is a collaborative storytelling platform. With it, you can work together with your friends to create your own unique stories and then share them with the world. We first saw it at Infotel 2015 where it was arguably one of the coolest Android apps on the show floor. So what exactly has the Mogo team won as finalists? Quite a long list of valuable prizes actually.

Again, that list above is what they’ve won as finalists. If they win the competition then not only do they get to meet private investors but also potential revenue from commercialization of contestants’ applications, media coverage AND additional prizes.