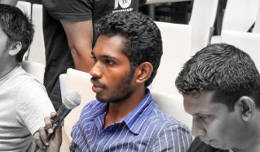 Arunoda Susiripala is famous within the Meteor community.To say that he’s built a name for himself and his company (Meteorhacks) is an understatement: to the select community of developers using the Meteor framework, Arunoda is practically unavoidable: run a Google search on this radical, high-performance framework and you will eventually end up reading something by this guy, who describes himself as a simple “Web Geek”. His plethora of research, criticisms, tutorials, are considered a goldmine by any developer. He also has an impressive GitHub profile, clocking in some 1,911 total code contributions to projects in the space of one year.

Sometime during cmbhack.js, Arunoda gave a rather interesting speech: getting noticed in the tech crowd. Casting aside the traditional disadvantages that Sri Lankan developers face (geographical segregation from most of the development hotspots), he pointed out that there’s a lot of things that local developers can do. In the interests of sharing his experiences with devs, we spoke to him on the same topic.

Arunoda: I and all of us at Meteorhacks build Meteor applications and provide upgrades for the Meteor framework that make it more effective and powerful. One of my first major efforts was Smart Collections. We try to figure out problem areas and address them in a way that’s useful to everyone in the developer community. We also educate, showcase and talk about a lot of Meteor stuff and help people figure out how things can be done.

Your advice for up-and-coming developers at cmhack.js 2014 was invaluable. Care to share it with us again? Which direction would you point people in?

If you want to get noticed, one of the best ways is to work and contribute to open-source projects. Not only do you build up a rep, but you also get to help make something better for everyone while doing it. It’s not about money – it’s about making something better for the sake of making it better. Everything else comes later.

Arunoda: It’s always best to look for what you personally want to contribute to. The good thing is, it’s much easier now because of github. Even 2-3 years back, working on something in open source was difficult – there were so many splinter communities and projects all completely unaware of each other. You had to be like a legitimate guru to get into dev. Now we have GitHub: it’s like Facebook for developers. It’s actually addictive. It works just like society – you need to show activity. You show off your smarts by contributing. The better, the more consistent  your work, the more you establish yourself in this massive community.

Don’t pick things like jQuery, Bootstrap: they’re one of the most popular projects in the world and a lot of people are contributing to it. Figure out something very small but very, very useful, like we did with Meteor. It’s not only about coding – you can create documentation, tutorials, fix bugs, provide value to the community.

There’s also another way to do it – start your own project. Find a niche market. Not something massive, but something you can take on. Then find some weakness. Then fix it. Start small and if your project is good, it will grow and become something great.

Is GitHub powerful enough to be the be-all-end-all solution for pulling off a new project?

For example, I figured out Meteor had scaling issues, created a project called Smart Collections, and fixed it – and after that, I started writing focused blog posts each week, spreading stuff I’d learned and showing people how to get done. Meteor itself eventually caught up to the functionality of Smart Collections. By that time, I had found another thing to improve: I’d moved onto Fast Render.

You need to position your blog. For example, my blog, Meteorhacks, is just that – it’s about hacks and tricks in meteor (editor’s note: this is good advice for bloggers as well). Social media doesn’t work. You need to capture emails and start emailing people. The next thing is, you can write a book after that. It’s hard, but not as hard as maintaining a continous blog. I did this with Pro Meteor – I collected a  lot of my previous content and put it together. Now people are recommending it actively. It’s not very hard, but you need to be consistent with something specific.

But I suppose you also need skill just as much?

Arunoda: Of course, that’s a given. Know what you’re getting into. You can’t bluff. To market yourself, you need to do something of value. I believe that at the heart of everything is having a really good product, however small, that makes a big impact in how people do things. Like Meteor itself: it started out as a small framework called Skybreak – and now it’s the third most popular .