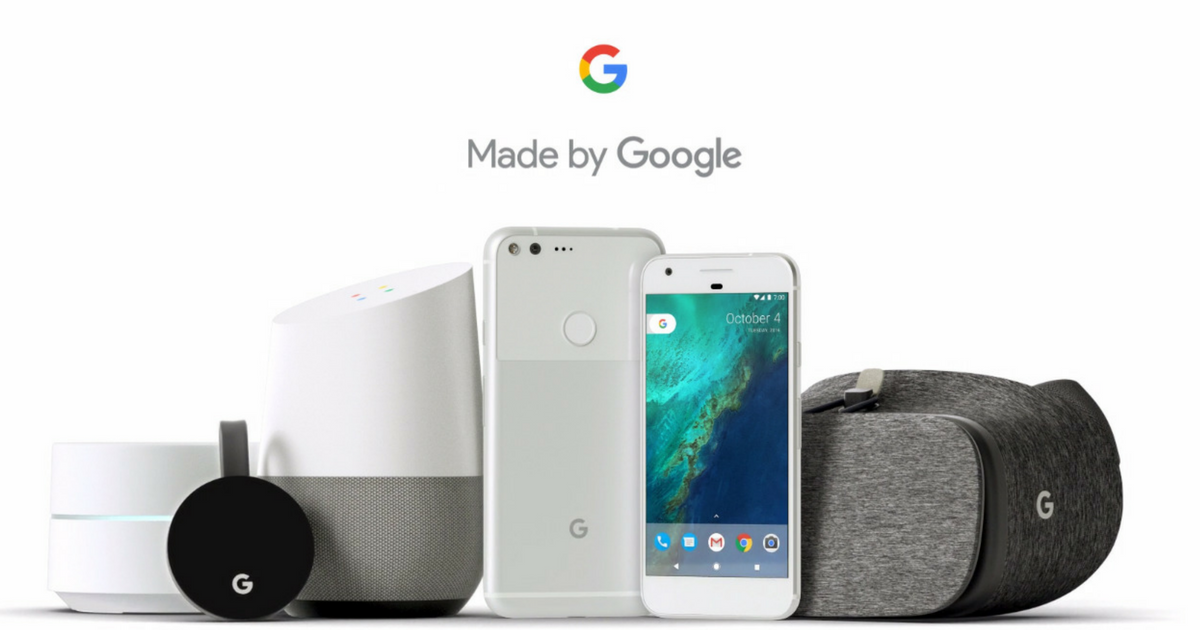 Yesterday evening, Google took the internet by storm once again. After months of anticipation, leaks, and excitement, we finally saw their massive October 04th announcements. And by massive, we mean new a LOT of new hardware to play with. We’ll now see the new Pixel phones, a router, a VR headset, an assistant and a streaming box. All #MadeByGoogle.

The biggest announcement of the day would have been the Pixel phones. Designed by Google and built by HTC. There are no major differences between the phones. The Pixel includes a 5-inch 1080p display, whereas the XL features a larger 5.5-inch Quad HD panel.

Both phones actually have a lot more in common. Both Pixel phones come with the new Snapdragon 821 processor, 4GB of RAM, and 32GB or 128GB of storage. There’s also a fingerprint sensor on the rear. One that looks similar to the ones found on the Nexus 5X and Nexus 6P.

Google has also taken photography very seriously with the Pixel phones. Both Pixel phones come with a 12.3 MP rear-camera. A rear camera that scored an 89 in DxOMark. That’s the highest rating ever for a smartphone camera. It’s an amazing camera and every Pixel owner gets free unlimited cloud storage to backup pictures and videos. All of which will be in high quality.

As with the Nexus lineup, both Pixel phones will ship with the latest version of Android and will be the first to get updates. Additionally, both phones will also have Google Assistant and support Google’s VR Platform: Day Dream. Interestingly, neither Pixel phone is water resistant. But it does come with a headphone jack. So that’s a compromise.

Along with the Pixel phones, Google also unveiled its first DayDream VR headset: the DayDream view. Supported by every DayDream compatible phone and designed for comfort. The headset uses soft fabrics rather than plastic to make the headset feel comfortable on your head. It also features a small slot to hide the controller.

On the software side, Google’s VR updates are now paying off. With DayDream view, you can be fully immersed in 360-degree videos on YouTube. You explore streets, in VR with Street View. And that’s only scratching the surface. Cardboard has been an amazing VR experience for years.

Daydream View along with its controller will be available for $79.

Google is now making routers. Say hello to Google WiFi, which creates a multi-point network. This means you can place multiple Google WiFi routers around your house. This ensures maximum coverage and no dark spots. As you move around your house, the system detects which router you are closest too and optimizes your connection.  You can also drop the ban hammer on people using your internet to kick them out.

This was first announced back at Google I/O. This little speaker is meant to automate everything in your house. But it was only yesterday that we got a price and release date. Just like its routers, Google Home will be available for $129. If you buy three then it’ll cost $299. It’s also designed to work with multiple units around your house.

What makes it powerful is the version of Google Assistant living inside. You can ask questions like, “What’s new on ReadMe?” and it’ll give you an answer through the speaker. You can also use it to set alarms, play music and more. This also the only version of Assistant that can control smart home devices.

Last but not least, the Chromecast, has been given an upgrade. The Ultra supports HDR, Dolby Vision, and 4K. The Ultra also has an Ethernet port integrated into the power adapter. Besides that, there’s nothing new about the Chromecast. Except for the price, which is now $69. The Chromecast Ultra will be available for pre-order in November and ships in December.

It’s not every day you hear Google announcing hardware. It’s even rarer for them to dedicate an entire event to hardware. But here we are and we are excited. The Nexus lineup of phones consisted of the greatest Android phones to hit the market. These phones were well worth the price not only in the year they were released but for many years that followed as well.  That’s why we’re excited about the Pixel phones.

If the same footsteps taken while designing the Nexus phones are taken, we’re sure the Pixels will be a treat. Not to mention, it’s other devices. DayDream View, Google WiFi, Google Home, and even the Chromecast Ultra. We probably can expect these devices to be equally impressive as well. However, unlike the Pixel phones, one has to question whether these devices will hit Sri Lankan shores. Only time will tell.

The Cost of Your Internet Data