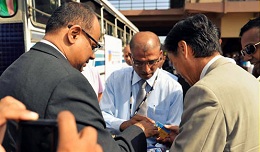 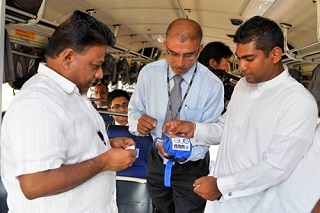 A few days ago we spoke of how mobile giant Dialog Axiata is to soon go on a field trip with their “TOUCH Travel Card”. However, from the looks of it, Airtel has already hopped on the bus with their e-bus ticketing mechanism with their NFC enabled multi-functioned payment system.

Before any of us launches into our own speculations, let us put the required institutions and details in place:

The e-bus tickets will be made available on 225 long distance buses that belong to the Matara Passenger Transport Company and the payment system on the ‘HNB One Card’ (a NFC payment card launched last Christmas). This means, we can all stop worrying about getting our wallets picked when asleep.

According to news sources, the e-bus ticket would soon translate to being made available for ATM transactions, other transport facilities, expressway toll stations, drive-through restaurants and supermarket and fuel stations.

About the ‘HNB One’ Card

For those who don’t know, the ‘HNB One’ card is a NFC enabled ATM and (global) debit card. Keeping in line with the NFC card branding of “tap and go”, a long-term use of HNB One includes faster checkout counters replaced by Point of Sale network with NFC-enabled machines that would not be dependent on inefficient cashiers.

So here’s a closer look at what “HNB One” partners would be doing as part of their collaboration.