A long time ago, a man named Ferdinand Porsche looked back upon a fine career and remarked, “I couldn’t find the sports car of my dreams, so I built it myself.”

Many people can relate to this, but perhaps none more so than a tiny team working out of Trace IT City, Maradana. They’re working on the impossible: a custom-built supercar that’s fast, gorgeous, – and electric. Perish the thought of a homegrown Toyota Prius: this thing’s designed for a zero-to-sixty-mph time of under four seconds. When – and if – it arrives, it’ll be one of the fastest cars ever to grace Sri Lankan streets. And best of all? It’s meant to be fully Sri Lankan.

The Vega is best understood in terms of what it is right now and what it’s intended to be. As I type this, it is a work in progress, a frame of metal housed in a storage facility at the far corner of Trace Expert City (also known as “that new IT park” in Maradana).

Occupying the other half of this facility is a workshop, a scene that looks like something lifted right out of The Fast and the Furious. On the wall is pasted a render of the supercar from the side: on every other wall is a hand-written render of it from various angles, marking out components in arcane scribbles. Calculators, wires and computers lie everywhere, covering every inch of available surface area. Lights blink. Things beep. There are whiteboards nailed to the walls. A lone Breadtalk bag sits in a corner, looking utterly lost. Inside, we’re greeted by Dr Beshan Kulapala, the project manager.

The rest of the team – a handful of men in Tshirts and jeans – barely look up as we enter. They’re too obsessed with turning the frame into what they intend it to be – a lightweight, carbon-fiber machine that will zoom along the road in silence. They’re getting there. It’s got two 450-horsepower motors providing a whopping net total of 900 horsepower.

To put that in perspective, the original Bugatti Veyron – which Jeremy Clarkson of Top Gear calls “the best car ever made” – boasted 1,001 hp. A Shelby Cobra? A mere 662 hp. And the motors in question are complete – as the VEGA team stands up to greet us, we catch a momentary glimpse of something very heavy-looking on a table. Yes, that’s 450 horsepower right there.

Unlike many components in this car, the motors are a custom design, manufactured in the USA and brought down to Sri Lanka. “It’s going to be fed by Lithium-ferrous phosphate batteries,” says Dashantha Gunaratne, over the noise of someone wielding a metal-cutter with great enthusiasm.

Dashantha is the designer of the VEGA. Formerly from Lotus, he takes great pride in his work: the VEGA render on the wall has his name carved into the tires. As he explains how the motor works, he hands me a slim silver packet with + and – terminals. This is a battery: they’re putting lots of these of these into the car – they don’t want to disclose the figure yet. Their target is a range beyond 150 miles – basically, to cross the width of Sri Lanka without having to recharge. Apparently it’s more efficient that what Tesla used in the Roadster. Likewise, there’s a lot of electronics that goes into the car. The entire car is going to have more than 25 electronic control units, all designed and built from scratch.

There’s a lot of work left. Right now, the team are putting things together: there’s lots more work to be done. The hulking frame next door has to be turned into a drivable platform by December – not as fast as the final product, but a representation of what it’ll be. And then it has to be dismantled and rebuilt in carbon fiber.

There’s no retail price announced yet, but they’ve spent some Rs 30 million on the journey thus far. Eventually, this thing will venture out onto the road: and eventually, it will be sold in numbers for huge sums of money. It’s not going to be easy. Throughout the whole process, everything has to be questioned and re-evaluated – the mechanics; the aerodynamics; the design. Building a car, much less something race-worthy, is a gigantic task, especially if you’re doing it from the ground up, but this little team – no more than twelve people are present here – looks like a positively nightmarish task. Big car companies take years, if not decades, to bring a car to life. These guys barely have a few months to create the first prototype.

To get some sense of this achievement, it’s important to step back and look at Sri Lanka’s engineering industry. We’re not known for building cars. The closest thing Sri Lanka has got to a car manufacturing firm is Micro, known mostly for assembling licensed, rebadged Geely and Ssanyong vehicles. The as of yet unbuilt Vega – a custom-built electric supercar – is positively a freak of nature even in concept. Which brings us to the question: how – and why – is CodeGen building a supercar?

It would be fair to say that VEGA began with Dr Harsha Subasinghe, the CEO of CodeGen.  In fact, the team’s unanimous on this: the VEGA began because Harsha wanted to do something new.

“Beshan came to work at CodeGen,” recounts Tilak Dissanayake, a vociferous expert who joined the project early on as a volunteer. Tilak himself has a background in aerodynamics and airplane design, and he’s easily the most outspoken of the CodeGen team. “He had a long career at Intel in Oregon, designing chips. And then one day Harsha discovered that this guy – aside from his PhD – had a passion for restoring cars.

Things escalated from there. The project attracted people with a common love of cars. “We had lots of problems,” says Sasiranga De Silva, a young lecturer from the University of Moratuwa – also a volunteer here. “We had ideas, they got slammed, we pulled out more ideas, and we eventually settled on a certain concept: a supercar.” Initially there was talk of doing a Mazda RX7 conversion. The idea was to strip out the internals and replace it. They eventually decided to do a new product.

“Harsha wanted to do something great and sexy at the high-end. There’s a lot of criticism that has been leveled, but it’s the same concept Tesla used: create something that’ll grab the world’s attention. A high-end product establishes things. It establishes the fact that we have the chops to do it. If we started off making a three-wheeler, nobody would care. Our plan is to create something on the high end, establish a reputation and extend those skills to things down the scale – clean vehicles produced in the city that run green, reduce pollution and possibly reduce foreign oil dependency. “

The team solidified into this – a multidisciplinary mix of a dozen or so people with a supercharged aura about them – an edge-of-the-seat vibe, as if they’ve absorbed the qualities of the car they’re building. A motley handful of cherry-picked experts, the VEGA team is a Sri Lankan avatar of boutique supercar designers everywhere.

There are many names that aren’t mentioned here, but they’re all part of this story. Together with men from the Army Engineer Corps, they’ve designed, redesigned, built and rebuilt.

“You see, it’s an exercise in packaging. Say from a design perspective, we want to look it a certain way. Then we have to figure out where to put the passengers, the electrics, the engine – and we have to redesign, reiterate. We have to create a concept demonstration – I’m going to guess that might at least take a couple of years. Then we have to get this certified, crash tested, type certified – all of these things have to happen. The intention is to make a road car, not a concept or a track car. We want a safe car, tested beyond what’s required. Because somebody at some point will drive it into a tree.”

When I ask what made them confident that they could pull all of this off, everybody jumps in. “We have the horsepower!” “The design, it’s aerodynamic, lightweight –“ “We have the expertise!” “Physics, physics!” “I think we’ve got this far because of our team,” says Beshan. “They’re great at what they do, they’re not afraid, they’re willing to learn, and they’re incredibly hardworking. We’ve had tons of sleepless nights here. And of course, the point is to build something everyone can use. We’re even working on a charger that can be installed at fuel stations and can charge cars like ours or the Leaf.“

“How would you describe this car to someone who’s never seen this before?” I ask.

“Sira!” says Tilka. “Onna giya!” says another with a grin. There’s laughter all around. 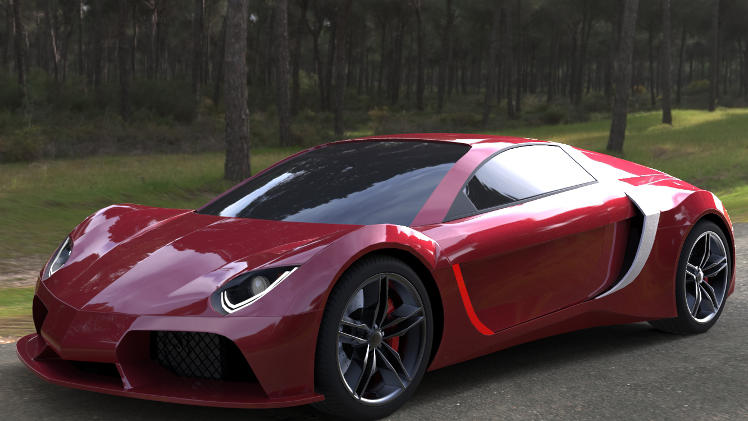 “The reality of doing anything different from the norm is that people are going to throw rocks at you,” says Tilak. “You need a thick skin. We’ve got that. All kinds of negative comments are already coming up everywhere – that’s all part of the course. The idea is to show the world that we, as Sri Lankans, can come up with something that the entire world is going to crave. Apitath puluwang.”