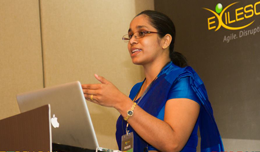 We say our systems run on AI programs, or basically we have bots doing this and that. Be it the bot which supports your dev teams to write good code or the big boys who run complete assembly belts at Toyota, the concept is the same, Artificial Intelligence; to replace or help man’s work.

To explain the theories behind AI and how the industry could utilize those for a more advanced tomorrow, Dr. Subha Fernando, the HOD of Computational Mathematics from University of Moratuwa joined us at Dev Day 2015.

Let’s start from the basics, ‘What is intelligence?’ as she said, it is the ability to interact with the real world, reason and plan based on given input from the external world and lastly to the main point, to learn and adapt. Next the discussion went on to different types of AI.

Modeling the human behavior. This is ultimately tested by the Turing test, yes you guessed it right. It’s a test to determine whether a computer can “think” proposed none other than Alan M. Turing. But the contradictions arises when intelligence takes many forms so this might not be the best way to asses it.

Quick question, is it important for a system to act human because not all humans are intelligent?

Taking a bit beyond from the first one, here we consider the cognition. The behavior must not just be humanly but it should do it in such a way demonstrably analogous to human cognition.

This is how the majority of today’s AI applications are modeled. Here, we forget about how humans think and base the system on pure logic. Also, this is where you meet software agents.

Software agents are undoubtedly one of the closest AI systems to many in the industry. According to her (a bit lengthy) definition, an agent is a computer system that is situated in some environment, and that is capable of autonomous action in this environment in order to meet its design objectives.

“When you work with the environment, it puts several constraints on you. The environment will always have an action.” – Dr. Subha Fernando

A rational agent has three concepts behind him. Belief: the facts it knows about the environment. Desires: the objectives that have to be achieved. At this point, it doesn’t necessarily need to achieve up to 100% but can be halfway to the goal. Intentions: the ultimate goal.

“You can’t take the perception as it is, it needs to be translated. This is where the belief is created. Then the desires will be set.” – Dr. Subha Fernando

Then she went on to an example. How this rational agent could cater a bored customer. According to the situation the agent will draft a plan, the goal will be to make him happy and satisfied. The agent may use a plan that is preprogrammed or it will create a new plan which can be executed. This will be learning.

A new word again, what is learning? It means doing something better (with a higher probability of success) than you did the same yesterday. Then you can say the individual has learned something from his previous experience. Which at the same time gave him an environment to learn.

The next way an agent will learn is through its own knowledge base. The agent in most cases poses abilities to conduct natural language processing. Which allows it to look through patterns of information and expand its knowledge base.

That is just a single agent, how about a multi-agent environment. In this situation the experience, plans and the knowledge base can be shared with others, increasing the probability of success furthermore.

Once the action is executed, it has to cross check across the environment to make sure whether it has really reached the intentions.

Next Dr. Subha moved into deep learning. “You can represent the same concept as a whole (compact) or broken down to several parts.” She explained defining what deep learning is. Deep learning speaks about several layers of networks, which could even go up to 20 to 30 layers. Deep learning has a lot of power to such a level as it even has the abilities to recognize one object and differentiate from another.

What if one blasts you with a lot of information? A lot we mean. We tend to forget them, don’t we? Probably a reason why many of us forgot what the lectures said the other day. This happens in neural networks as well.

Wrapping things up, she came to the academic disciplines relevant to AI. It was indeed a long list which started from Philosophy, Mathematics, Statistics, Computer Engineering and went on to Linguistics and Neuroscience.

“If you really need to build an AI, then u will need all of these” – Dr. Subha Fernando

The session was a lot of theory, which was a bit hard someone to digest if you didn’t pay close attention. But we learnt quite a lot.