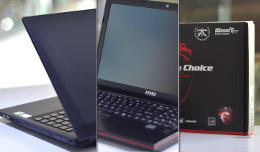 Not so long ago, we reviewed a gaming laptop from Asus, a Rs 220,000 beast that brought a lot of powerful hardware to the table. We liked it, but it left us wanting a bit more bang for the buck.

Needless to say, the folk over at Redline Technologies had a lot to say about it. Mostly things like “MSI does better stuff. For the same price.” Curious, we packed up our reams of paper, put on our review hats and prepared to dissect what Redline had to show. Incidentally, we also game across an entry by Gigabyte, offering so much value for money that it was promptly shanghaied in.

Welcome to the great laptop shootout.

First, the current champion: the ASUS ROG G56JK. Check out our review here if you haven’t seen it. Rs 220,000, packing an i7 4700HQ – that’s a quad-core processor that turbo boosts to 3.4 GHz, 8GB of RAM and Nvidia GTX 850M. It ships with a few extras: a speaker, a ROG-branded gaming mouse, and has a pretty good screen to boot.  We gave it a 3.5 out of 5 stars, on the basis that a mouse doesn’t make up for that relatively middling graphics chipset.

And now the competition (photos by Kaushalya Prabuddha)

Why the difference? There are some obvious sacrifices. For starters, the Gigabyte is largely matt black, soft-touch plastic where the Asus is aluminum. Outside of that, no physical compromises seem to have been made. The build material is plastic, but the quality’s pretty high and the design is such that it looks great and feels good.  The synaptics touchpad isn’t impressive – good luck trying to use it to play a serious game – but it’s large enough to be confortable for average stuff, like browsing 9gag. The keyboard’s actually quite good.

The overall impression is that of a laptop that’s been designed within a budget, but designed well enough that nothing’s been really skimped on. Perhaps it’s not as good as the first generation of Gigabyte gaming laptops to hit Sri Lanka, but quite decent nonetheless. Subtract the cost of the Windows (about Rs 14,000) and the Gigabyte P15F still has the Asus beat for value for money.

The next of the shootout is the MSI GE60 Apache, which we pointed out some time ago as good competition for the Asus. While the Gigabyte matches the specsheet, the MSI GE 60 matches the Asus’s pricepoint. Well, almost. It’s Rs 10,000 cheaper.

What does it pack? A lot of metal. It’s thicker than the Gigabyte and a good deal heavier. The build’s actually sturdier than the Asus: none of that top-panel flex we saw there. It also packs a more power powerful Nvidia GTX 860 M. Now this we like. At that resolution, the 860M does enough spadework to let us play stuff at High settings at a comfortable 45-60 FPS. The keyboard and the touchpad take a hit: they’re while serviceable, they’re not as pleasant to use as the Gigabyte’s.

This is the ASUS’s direct competition. At Rs 10,000 less, it packs a slightly better build, very similar looks, an equally acclaimed Taiwan brand and better graphics. The Asus competes with a gaming mouse, speakers and original Windows. It looks like the ASUS gives more for what you spend, but we’d pick the better graphics over things like mice any day. Mice can be bought, replaced and upgraded. Graphics can’t, and that’s what matters in the long run. If you’re a gamer, that’s what you should be looking at.

The Apache has its own issues. For one, it can’t be comfortably kept on a lap – rather knobbly stands on the bottom make sure of that. However, the Dragon gives the Republic of Gamers a good run for its money here.

What would we pick? Neither. Because as it turns out, there’s another option that makes both laptops look bad. It’s the MSI GX70 Destroyer. Alright, the GX70 3CC Destroyer, to be exact.

We’re not quite sure how to feel about the Destroyer. You could call it large (17.3 inches) and powerful. You could also call it a steal in every possible way. The Destroyer pairs a quad-core AMD A10 processor with a Radeon M290X. A 290X mobile. At the time of writing. this is THE most powerful graphics chipset in Sri Lanka. It combines this with a Steelseries keyboard with full-color, customizable backlighting, an IPS HD display – none of that TFT stuff – and speakers from Dynaudio, the same guys who make audio for Bugatti.

No, we don’t understand how or why. As far as gaming is concerned, the Destroyer totally lives up to its name. It flat-out destroys everything else that Redline and JKOA have to offer. This is basically Team Red swinging into action, and it undercuts everything here to claim not just the throne but also the value-for-money prize.

Downsides exist, of course. That A10 isn’t as powerful as a quad-core i7, so expect a performance hit if you’re into intensive stuff like 3D rendering. It’s also bound to be a fair bit more power-hungry than all other offerings here.  The touchpad is also annoyingly small, about the size of that of a regular laptop. It’s also bulky. Very bulky.

But for gaming, it just doesn’t matter: the sheer power of the M290X carries the day. The IPS screen is leaps and bounds ahead of everything else here. The fact that you can get the keyboard to light up in any color you want is simply a plus at this point. It’s  even got a 9-cell battery, quite a bit larger than the 6-cells on this shootout, so it should hold. Everything else is irrelevant. If gaming is what you want, and you want a laptop to do it, the Destroyer is what you should be buying. If it’s out of stock, we recommend carefully avoiding all other laptops and simply waiting until new units arrive. We’re giving this our Readme Choice Award – it’s too good to miss.