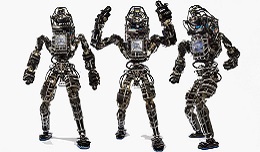 There seems to be somewhat of a lack of interesting tech news today. While we ponder on as to why that is, have a look at what we dug up. Good Morning folks.

Back in 2013, Boston Dynamics unveiled Atlas, a humanoid robot. Funded by DARPA, Atlas’s primary purpose in life (pun intended) is to aid emergency services in search and rescue operations, and to operate in environments generally not accessible to humans. Now, a redesigned version of Atlas has been revealed by the Pentagon. The redesign includes more advanced wrists which allow for greater movement including the ability to turn door handles without having to move its entire arm. In addition, it also has a wireless router in its head to provide a radio link to the teams, resized motors in its hips, knees and back to give them extra strength, repositioned arms and shoulder to let the robot see its hands in motion, which should help its operators control it. But wait for it, there’s more. Atlas now has a built in battery pack, thus allowing it to function without an attached power cord.

To those who don’t get the significance of this, it means that the machine (now owned by Google) qualifies for the final round of a robotics competition run by DARPA.

There will be a total of 20 teams taking part in the event which is scheduled to be held in June. Of the 20, 7 are using Atlas. While this seems a tad redundant, they will actually be adding their own software to the machine and adopting different strategies to cope with the challenges posed.

The addition of the battery means that the final event’s rules are met. The rule states that the human-supervised robots taking part cannot be connected to power cords, fall arrestors, or wired communications. You can click here to check out the details about the competition.

So it seems Kim Dotcom is a bit of a glutton for punishment. Three years ago, his Megaupload site was seized and he was arrested in an armed raid on his New Zealand house. Now, he has released an encrypted chat service, called MegaChat. Kind of like an In-Your-Face approach to compete with the Microsoft-owned Skype.

Initially released with video calling function, text chatting and video conferencing features will also be added later on. He has also promised mobile apps as well.

MegaChat is pure browser-based and therefore does not require any software to be downloaded, apart from plug-ins for Chrome and Firefox which are available for faster loading and added resilience against attacks. With all the hullabaloo about the US Government having backdoors to US-based online service providers and the whole Edward Snowden whistleblowing incident, MegaChat is pitched  as a secure alternative to Skype that cannot be accessed by national intelligence agencies.

Although touted as unbreakable, Kim Dotcom also tweeted how Mega encryption has never been broken. and that Mega user passwords have never been compromised. In retaliation, Graham Cluley, an independent security consultant pointed out that just a year ago Mega was criticised by experts for a range of security holes, ranging from cross-site scripting flaws to a poor implementation of encryption, and the easy extractability of Mega passwords.

I rarely use Skype but let’s just see how things span out shall we?