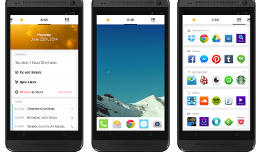 Aviate is a launcher app available for most Android devices. It’s making waves because of how it distinguishes itself from the hundreds of other launchers out there – namely, it offers users apps and information based on the time of day and location. Going somewhere? Aviate detects your GPS settings and keeps your Maps application at the top.  At a restaurant? Ideally, Aviate will change to show all customer reviews and even show menu cards (if applicable). And so on.

Aviate was first introduced back in 2013 and was available as a beta. Later, internet giant Yahoo purchased Aviate and continued with its development. On the 25th of June, Aviate formally launched with a redesigned look, several additional features and more importantly, a new name: Yahoo Aviate.

Users who have been running Aviate since its release will know that when in Beta, Aviate displayed news apps the moment you woke up in the morning. Now it’s been redesigned to show snippets from Yahoo’s News Digest app which is also downloadable as a 3rd party application.

However, it’s not just a rebranding. Before you think that it’s a giant advert, let’s have a look at what Aviate is: a fundamentally brilliant, albeit spartan, interface for your Android.

For starters, the app interface is beautifully designed. The homepage is a simple layout with a wallpaper. Below that are your favorite apps – which can be changed and/or reordered by dragging the relevant app from the app drawer. It’s designed to simplify the smartphone experience, and it does do just that. 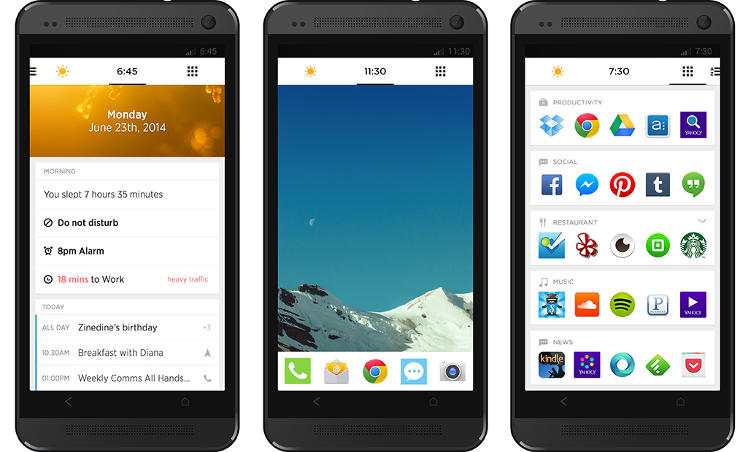 The first thing you notice on the launcher is the top bar that dynamically adjusts according to the time of day and will offer apps based on your location. This in itself is where the beauty of Aviate lies. If Aviate detects (via GPS, WiFi or mobile data) that the phone is in the vicinity of work or home, the top bar icon changes to either home or work depending on the location and displays the relevant collection. For instance, if I check into my office, Aviate offers me work apps such as Gmail, Drive, Office and Dropbox, all of which I use on a daily basis at office. If I however go to a restaurant or hotel, Aviate offers me apps related to cooking, and even offers recipe apps (if installed). If I’m on the move and check my phone, Aviate switches to travelling mode and offers me apps such as Google Maps, Foursquare etc. Plug in a pair of earphones and Aviates switches to music mode, giving me access to my media apps such as PowerAmp and MX Player.

It’s brilliant. The end result is an intelligent interface that makes your phone even more personal, even more intelligent and responsive to your life.

But back to the homescreen. Swiping to the left offers you various cards such as weather and a wallpaper that changes per day. You can add your existing app widgets to the screen and view them as you would on a regular homescreen. Swiping to the right gives you a “Collections” screen that automatically categorizes all your installed applications based on the type of app they are. The collection titles range from Productivity to Social to Photography and so on. Each collection also has features to add more apps that are related to that category giving the user a wider scope to discover and use new applications.

Swiping to the right once more gives you all your installed apps organized by starting letter in an ascending order. From here you can drag apps into your collections or into your homescreen to have even faster access to your favorite apps.

Swiping to the furthermost left gives you a set of tiles in case you want to manually see your collections or you are not connected to any mobile or Wi-Fi network. Settings, Today, Moving, Listening and Work are some of the tiles that the user can switch to. So even if you don’t buy into Aviate’s intelligent sensing – if you’re big on saving battery, for example – a few taps and voila: switching done.

Yahoo’s acquisition has allowed the Aviate team to add new features and revamp others. For example, in Aviate beta, the calendar app was activated while you were at work. With the newly improved Aviate, it actually shows you actual calendar entries with one-touch access to dialing a conference call number or getting directions to your next appointment.

Is it just another launcher? Hardly. Now that the app has been moved to open, everyone with a smartphone can use Aviate. It’s light, blazingly fast, and very efficient (once you get the hang of it) and will make your life so much easier. It will even make you sandwiches and wash the dishes for you (there’s a separate download for that though).

If you have an Android device and you’re bored with looking at the same homescreen day in and day out, give Aviate a try. You have nothing to lose and everything to gain.