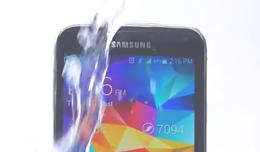 If you haven’t figured it out yet or have been living under a rock, people all over the world have been dousing themselves by the bucketful (literally) in an attempt to raise awareness (and funds) to help those suffering from ALS. ALS – or Amyotrophic Lateral Sclerosis – is a disease where individuals affected may ultimately lose the ability move voluntarily.

With everyone doing their part to raise awareness, Samsung decided to join the fray in their own unique way. They literally took an Ice Bucket Challenge to the Galaxy S5. Yes you read that correctly, they took an honest to god, perfectly functioning Samsung Galaxy S5, and decided to douse it with an entire bucketful of ice cold water.

The video (posted to Samsung’s YouTube channel in the UK) has the smartphone speaking via a computerized voice stating that it is the flagship Galaxy S5 and that’s it’s taking the Ice Bucket Challenge. It also states “Gosh that’s freezing” after the challenge is complete.

That’s not all. With a regular Ice Bucket Challenge, the person performing the act must challenge other parties to do the challenge, and Samsung pulls this off in a clever ploy and shrewd marketing tactic; it nominates the iPhone 5s, HTC One M8, and the Nokia Lumia 930.

As we all know, the Galaxy S5 is THE flagship phone released by Samsung to date. It packs quite a punch and comes with all the bells and whistles including IP67 certification waterproofing features that lets it be submerged in up to 3 feet of water for up to a period of 30 minutes.

The HTC One M8 and Nokia Lumia 930 also advertise similar water resistance features, but don’t capitalize on the waterproofing like the Galaxy S5. In fact, they don’t mention anything about the devices having any sort of IP certification whatsoever.

The iPhone, too, lacks waterproofing features and that has been THE killer when comparing and differentiating the features between the devices.

How crass can you get?

Essentially, the entire purpose of The Ice Bucket Challenge is to raise awareness for a very serious disease that if not treated, can ruin a person’s life. It’s definitely not to be used as an advertising ploy to sell your phone. Even if Samsung DID donate financially to a UK organization or to the ALS association, I feel that they are not justified in their actions to glorify their the S5s. To be honest, it’s quite barbaric.

Kudos to Samsung for their efforts, but they’re taking a deep plunge into icy cold territory by using a charitable endeavor as a marketing ploy. It’s also kicked off a whole trend of exploiting the Ice Bucket Challenge – see this post on TechCrunch for items that are making a buck off a charitable movement. Better read up on “Frostbite” and “Hyperthermia”, Samsung. Something tells me you may need it.