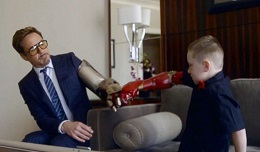 So researchers at Berkeley’s University of California have announced that they have succeeded in developing a material that is not only ultra thin, but also has the ability to change color on the fly via bouncing light back on the nanoscale level.

Called the “chameleon skin”, the material actually changes color when flexed, or when a small amount of force is applied to the surface. But as the material is a lot lighter and much more flexible than previous attempts, the color-shifting effect could be used in wide range of color-on-demand applications when applied to different surfaces.

Tiny ridges, even smaller than a wavelength of light are embedded into a layer of silicon film which is around 1000x thinner than a single human hair. The silicon layer, around 120 nanometers thick, is flexible and functions as a skin that can be adhered to other surfaces. It is the spacing of the ridges that produce different colors. Additionally, the material is highly reflective, bouncing back up to 83 percent of incoming light, which makes it quite efficient at producing those colors.

The Chameleon skin by contrast uses something known as structural coloration. Think of the color changes seen in peacock wings or beetle shells.

The research team says the silicon material could have wide-ranging applications such as for display technology, camouflage materials, and even visually indicate structural fatigue in buildings or bridges.

Speaking of chameleon skin, here’s another piece of interesting tech. Scientists have made a little drop of metal that’s able to propel itself through liquid and change its shape to fit through a narrow passage. Unlike the liquid metal material found in the Terminator series, it does have some fascinating properties. For example, it could one day be used to develop new methods for delivering drugs through blood vessels.

Scientists from Tsinghua University in China mixed together gallium, indium and tin. After that, they attached a bit of aluminum to the drop. When dropped into a container of sodium hydroxide, the aluminum created a chemical reaction with the solution that produced tiny bubbles, thus propelling the drop. The propulsion was further enhanced by a natural imbalance of electric charges occurring between the front and back of the drop. So as long as the aluminum bit stayed at the back of the drop, it moved forward.

The scientists then placed the drop into a container with channels and the drop followed the pre-designated path. If the path narrowed, the drop was able to adjust its shape and squeeze through.

The experiments performed by this team are built upon previous work, who are interested in developing soft robots that can change shape and move on their own.

We all know Robert Downey Jr.. If you don’t, you really need to figure out what you’re doing with your life. Anyway, the “Iron Man” actor, has teamed up with Albert Manero, founder of Limbitless Solutions to deliver a young boy named Alex a bionic arm.

The lucky recipient Alex, is a 7-year-old who is addicted to superheroes. He was also born with a partially disabled right arm. so Manero and OneNote built him a special bionic arm. Get this though, it looks exactly like Iron Man’s.Playing in Iron Man’s alter ego Tony Stark, RDJ delivered two Stark Industries suitcases, each containing fully-functioning bionic arms, one for Tony, and one for Alex.

Manero, who is a mechanical engineering student, builds and donates cost-effective 3D-printed bionic limbs to children around the world. His company strives to create a world without limits, where everyone has access to the tools necessary to manufacture simple, affordable and accessible solutions through open source design and 3D printing.

Though most of the new arms won’t come with repulsors.