The good ol’ mouse and keyboard, while an excellent weapon, ain’t got a patch on a gamepad when it comes to certain types of gaming. Racing? Combat? Platformers? All of these turn into entirely new and awesome experiences with a decent gamepad, especially when playing with or against a friend. (Mortal Kombat, anyone?).

So today on the chopping block are not one, but three peripherals: the Logitech F310, F510 and the F710, provided to us for review by Redline Technologies. Retailing for Rs 3500, 5500 and 6500 respectively, these stand out from locally available Chinese offerings because of their build quality, warranty and relatively steep price. It’s time to dust out those Grid 2 and Mortal Kombat discs and put these controllers through their paces. 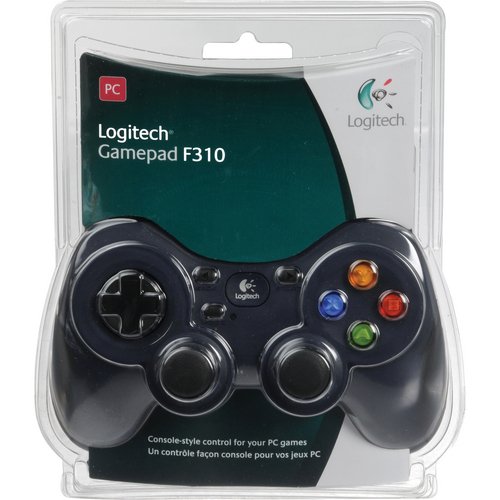 Observe, ladies and gentlemen of the jury: Exhibit A: the F310. The cheapest of the lot, the wired F310 provides the basic functionality of all three models: two rubber-tipped analog control sticks, a floating directional pad (aka D-PAD), four action buttons for the thumb and four more out back.  The control sticks give about a 120-degree freedom of movement in all directions. It’s built entirely out of navy-blue and black plastic. Console gamers will notice that I’ve just described a Playstation joystick down to a T. This layout is essentially shared by all three peripherals.

For 3500 bucks, the F310 is heavier and sturdier by far than ye wilde random Chinese joysticks that you find all over Unity Plaza. That means it won’t break down after a few month’s worth of Burnout sessions. At the same time, it has somewhat lower build than the F510, F710, or Xbox controllers, so you know where you stand. In case you’re concerned about durability, the F310 can take a serious beating: it’ll actually last you for couple of years.

The one on the left is a brand-new F310. The one on the right has been through 2 and a half years of racing games, a dozen 10-year olds, two SLCGs, a month of six-hour Mortal Kombat duels and a violent argument with half a tube of Superglue. It’s still alive.

The F310 is not without drawbacks. The sticks eventually (near the 1.5-year mark) start to get a bit loose and a little play comes into existence. This may or may not manifest itself as a loss of accuracy. And the back buttons require a bit too much force to be activated. You’ll also run into a certain amount of finger fatigue during long gaming sessions. At the price, it wins out on sheer value for money.

Exhibit B: The F510. Visually, it’s almost identical to the F310 (most versions available locally are the same navy blue). It has been called the 310 with rumble (aka force feedback). It brings minor alterations: slightly rubberized sides and better build quality. The back switches aren’t as annoyingly hard to press. All in all, it’s a better controller and one of the best in its class. The question is, is it worth the money? At 2000 bucks more, we feel the F310 is a better buy. Force feedback is something you tire of pretty fast. If you’re a fan of the Xbox controller, then just directly go for a wired Xbox controller: if the Playstation layout is your poison, then the 510 will suit you. However, for just a thousand rupees more, you can get the wireless F710. That’s a much better deal. If you’re looking to save cash, there’s the 310. The 510 is kind of an awkward ‘tweener.

Finally, the top dog of the lineup. The F710. The 710 is wireless. It’s also got force feedback. No, it’s not half-transparent: that’s just Photoshop at work. It is a nice silver and in our tests was solid for a good 25 feet from a 27 inch monitor. Beyond that we couldn’t make out the details on who was hammering who. (It’s one thing to play at a few meters away: it’s another thing entirely to do so when you can’t see the screen).

The 710 is more comfortable due to its rubberized back. Some people dislike the bulge of the battery cage at the back: in most cases we found it easier to hold. This controller is noticeably heavier than the others. For 6500, this is probably one of the best controllers you can buy in the world: the only competition for this is the Razer Onza and (arguably) Microsoft’s own Xbox Controller S. Wireless actually makes a huge difference. For just a thousand rupees over the F510, it eliminates a lot of hassle, especially when you’re gaming with friends. It’s this thousand bucks that makes the 510 look like a worse buy.

The only downside: you’ll have to swap out the batteries every now and then. (You know it’s time to switch when you start getting input lag). This is a minor downside given that you’re getting one of the best Playstation-esque controllers available for PC (the F510 and F710 appear on every top 5 list of PC controllers since they were made). It’s very rare that we can’t figure out something bad to say about a device, but in this case the F710 passes unscathed.

All of these controllers share one thing in common: the analog sticks provide actual analog control, whereas most cheap controllers are simply switches that act like keys with a stick glued on top. They also have X input support. Enable X mode, plug it into the PC and it’s detected as an Xbox controller. The control scheme works accordingly. A common downside shared by all these controllers is that the rubber tips of the analog joysticks start flaking after very heavy use.

It’s been said that there’s actually only TWO Logitech gamepads: it just depends on whether or not you want wireless. Thankfully, all of them exist in Sri Lanka. While you’ll find the 310 randomly scattered all over shops in Unity Plaza, all three models were consistently stocked only at Redline Technologies in the building opposite. If your wallet’s up for it, they’re all yours.  You can usually try out one of the open controllers there before making up your mind.