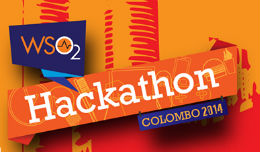 “There is a tide in the affairs of men.
Which, taken at the flood, leads on to fortune;

On such a full sea are we now afloat,
And we must take the current when it serves.”

The proverbial sea has been pretty full these past three days. Now, after 48 hours of solid hacking, the coders have returned to the stage. They’ve got just one last thing ahead of them: the awards. The past hour or so has been a curious mixture of tension and relaxation – as they made their nervous pitches and met each other over dinner to discuss their ideas.

There’s a whole plethora of awards, most of them for the social games and entertaining stuff that we witnessed over the past two days. However, there’s two serious awards: the first, winning 5,000 rupee vouchers from Kingsbury, is for the team that used WSO2 technology the best:  Cloud Pixel

“It’s very easy to do something for two days: it’s a lot harder to do it for a long time,” says Dr. Sanjiva. “it’s not about weekend innovation: it’s about creating something that persists. So I wish some of you will continue doing what you’ve done here today.”

And finally, the winners: Lynx! Their team, comprised of Pasindu De Silva, Nadeesha Cabral, Vidura Nanayakkara, Lahiru Dhanjaya and Chathu Vishwajith, have just earned vouchers from Citrus Travels and a GoPro Hero 3+ camera – each (by the Old Gods and the New, we’re jealous).

With that, we’re off. Everybody’s packing up their bags and moving their gear because Dr Sanjiva’s threatened to auction everything off if they don’t. We’ve powered down the faithful Hutch Mifi device (surprisingly, it hasn’t overheated) This is the README Live team, signing off!