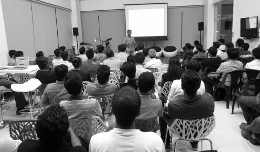 WSO2Con might be done and dusted, but that doesn’t mean we’ve seen the last of the middleware folk. On the 27th evening, we dropped by the WSO2 Office on Duplication Road for yet another Colombo JavaScript Meetup.  We made our way past the fish and the devs watching the cricket match and took our seats amidst some 60 geeks listening to Pasindu De Silva. 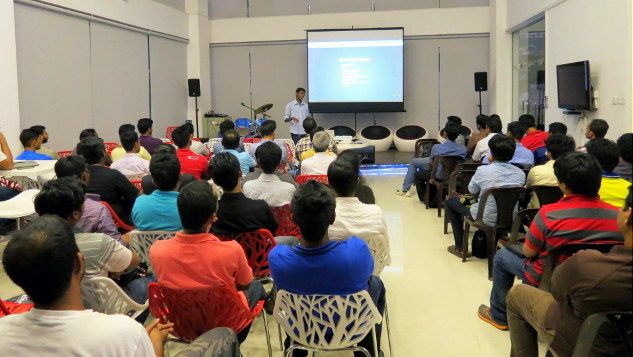 Pasindu’s presentation, an introduction to Socket.io, was the first of three. He started out by talking about Websockets and its drawbacks. As he pointed out, there are companies which use fairly old browsers which may not be fully compliant with Websockets and other new web technologies: this is where socket.io would come in, making JavaScript code executable even on ancient browsers. Once the theory was done, he brought out two demos – a multiroom chat and a pong example using socket.io. 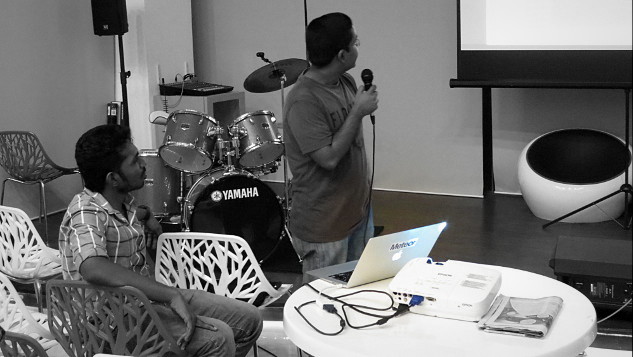 Next came Arunoda  and Pahan with an introduction to Meteor, an open-source JavaScript platform for building web apps.  They break Meteor to the audience by writing a simple todo app, detailing everything from the installation process onwards (sorry, folks, it’s not officially supported on Windows). It looks like Meteor’s very popular among the local developers: quite a few of the JavaScript people we talked to afterwards told us their experiences with Meteor have been nothing short of magical. To quote one, “It just works, dude. Most things fail on the first try. You can to get back into the code and hack away until it starts working. Meteor just…works…right from the start. Really cool stuff.“

What came next was a bit of a pleasant surprise for those seated there: Hiraash Thawfeek took the mic to announce cmbhack.js, Sri Lanka’s first Javascript hackathon. Of course, a few members of the audience have been keeping tabs on the idea ever since it was first brought up at the last Colombo JavaScript Meetup, but for most others it’s news. The idea is a 34-hour nonstop Hack Fest at Orion City where developers will meet, explore ideas and come up with something workable – in JavaScript – in slightly less than two full days.  It’s a supremely geeky event starting on April 5th, open to students and developers alike.


The last thing between us and the sandwiches was Muhammed Thanish on WebRTC and it’s various applications. A couple of interesting sites he mentioned built on WebRTC – js.att.io, which makes real phone calls from your browser; peer-server.com, which lets you turn your browser into a web server; webtorrent, which lets you torrent stuff without needing Bittorrent; then there’s Uproxy, which does what the TOR network does, except in your browser. 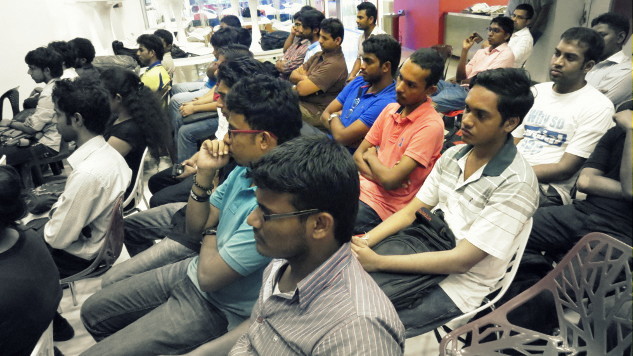 Definitely an eye-opener there. The most famous examples, however, are probably Chromecast and Google Hangouts.  To illustrate, he starts a slightly glitchy live webcam streaming example that fails the first two times and then works, setting up a Peer-to-peer video streaming page between a couple of people right there. Look ma, we’re on video!