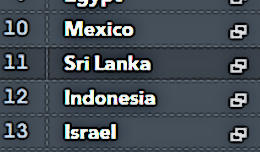 That’s a lot of money.

Why don’t Sri Lankan developers earn as much? To understand the reasons, we explored the source of the data (Bloomberg.com) and cast the numbers into local perspective.

What the numbers show

What the numbers don’t show

To make a huge generalization, there is no demand in Sri Lanka large enough to sustain a software industry of this size – the money has to come from overseas.For these jobs to exist in the first place, Sri Lanka has to be what it is now – talented and cheap.

To make another generalization, Sri Lankan developers are not going to earn top dollar simply because that destroys the foundation of most of Sri Lanka’s software companies – value for money. Efforts are being made to change this, but as long as Sri Lankans can do what foreign developers can do, and for cheaper, there’s no real reason for the status quo to change.

Note: article amended – corrections were made for the original article using the term “Swede” to refer to someone of Swiss origin. We apologize to anyone offended by this incorrect usage of the term.