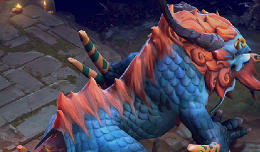 So you’re probably thinking this guy’s new year is two and a half months overdue or he’s experiencing severe reality lag. Well, it’s neither. Well, maybe a little bit of both. Te Chinese New Year happened on the 19th of February, 2015. What’s the big deal you ask? Well, if you, like me are an avid DOTA 2 player, then you obviously know that this can mean only one thing: The New Bloom Festival.

For those unacquainted with the DOTA 2 lore, the New Bloom Festival is an event held during the Chinese New Year. The first time I took part, there was a new game mode where players had to battle Nian, the mighty Year Beast. At a certain time, the Year Beast would spawn and the two teams (Radiant and Dire) would have to combine forces to defeat him. If victorious, all of the players received either Flamesalt Ingots (used to obtain in-game items later in the event game mode) or Jade Tokens (earned the same way, but requires players to have an active Fortune’s Favor or Abundant Fortune’s Favor booster).

It was a good time for DOTA 2 players to get together and work on new strategies to defeat the Year Beast – and even have some really dynamic team fights. It was all good fun, and the rewards were worth it.

My master told me of the creature’s first coming. It struck without warning, razing our first great city to the ground, slaughtering every warrior we had. And the next spring, it came back. And every spring since. We came to call it the Year Beast. And over time, we learned how to survive it. Then the heroes came, and we learned how to fight it. This year, we will not run from the Year Beast. No, this year, we will tame it!

2015 saw a twist in the Year Beast game mode. Yes, Nian was there. But now there were two of them (and they actually have genders). So each team had a year beast with them in an event called the Year Beast Brawl. Available to join during 10-minute time windows scattered throughout the day, each Brawl would give the victors amazing rare sets of items – whole sets! The matches were preceded by a countdown timer that all of us, and I mean all of us, couldn’t help checking every twenty minutes or so. What if we missed the shot at that legendary set? Oh, the tragedy!

Of course, Valve, being Valve, figured out how to make this interesting. Each Year Beast had 3 skill trees (combat, speed and support) and it has its own set of abilities, which any member of the team could use from a separate overlay. The Year Beast had Silencer’s Global Silence (which prevents all enemy heroes from casting spells for a certain amount of time) and Zeus’s Thundergod’s Wrath (which hits all enemy heroes anywhere on the map). If correctly timed, a combination of these two abilities plus your own teammates abilities could cripple the entire opposing team and destroy them all. To do all of this, you’d need to use a new resource called AP (Ability Points).

Now this is where things got a little hazy.

The Hero spotlight seems to have fallen onto Crystal Maiden, a support who has the ability to freeze enemy heroes in place and deal damage. The folks at Valve decided to give her the Frost Avalanche Arcana item set (Arcana are the rarest and most sought after type of item) for this event So anyone who was willing to fork out $27.99 (a little over Rs.3700/-) could get their hands on the item. Once purchased, the player would receive 4500 ability points, which could then be fed into the Year Beast.

Now THAT was unfair. For normal players, here’s how it would worked:

But if you forked out good money, you could buy AP. Lots of AP. And gift it, too.

Unfortunately, playing through it kind of took the fun out of it. Within the first Year brawl, the entire DOTA 2 network on steam got shut down due to a server overload and the game wasn’t playable for a few hours. You also had issues with the drop rate of items. For example, once Yudhajaya got wind of the event, he stayed up to play 7 events and won them. Result? He got same item set for Nature’s Prophet, SIX times. He doesn’t even play Nature’s Prophet. (it IS a mythical set, but still). On the other end of the spectrum was poor Jamal, who was stuck to getting uncommon and the occasional rare item. Not a single mythical.

And then there were the updates.

But worst of all was the fact that the event enforced something I see and hate in League of Legends – a tight metagame. In this case, the meta was extremely tight. EVERYBODY picked Warlock, Undying and Zeus. If you didn’t get them, you tried for Omniknight or Sniper. If you didn’t get any of these, GG. The Yearbeast worked spectacularly well with these heroes. Too well to be enjoyable when half your team are random picks and the other half are screaming about how Zeus is on the other side, so GG.

All in all, I’m not complaining, it is a nice change to see Valve actively taking part in cultural events such as this. A little bit of balance, though, and everything would be perfect.

Now, if they were to do something for our Sinhala and Tamil New Year, that would be fun. Just imagine an Arcana set for Drow Ranger or Lina which includes a Redda and Hatte. And maybe a mythical Peacock courier. That would be cool.