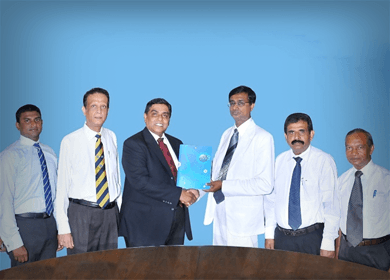 The NFC card reader devices set up at entrance points at the school allow students to ‘tap’ in their attendance. A pre-defined cut off time ensures that absentees’ parents are informed of such via SMS. The iCard bears vital information of the student, such as: name, school admission number, photograph, validity period, emergency contact number and card number. The card will serve as means to monitor attendance, control access to buildings, a travel card, canteen card and library card, while the iCard management system will generate valuable management reports increasing the productivity and efficiency of the administration of the school.

Speaking at the launch, Royal College’s Principal, Mr. H.A. Upali Gunasekara stated, “We have a long-standing partnership with Mobitel, and the launching of this project only means that this partnership grows in strength. The iCard project developed by Mobitel is certainly one that we needed to increase the levels of safety and security of our students and also reiterate to parents that their children are safe. This technology also helps us to address truancy, which is a common issue amongst all schools. This multi-faceted project has much potential and we are proud to be the first school in this endeavor.”

“iCard is more than just a new student ID card. It offers the much sought-after solution using the latest technologies like NFC for administration and management of schools serving many stakeholders such as students, academic staff, parents, and service providers.  It helps parents to monitor their children while assisting Principals and the Senior Management of Schools to make their operations more efficient. This project will do away with cumbersome manual reports, creating a digital, paperless environment in schools,” said Mr. Lalith De Silva, CEO, Mobitel. “As a nation which lost 30 years to a civil war, we now have to catch up rapidly and ICT will become a key catalyst, taking the country towards fully embracing the digital age. We have taken the initiative to rise above the call of being the national mobile service provider, by developing new technologies and introducing them to much-needed areas to improve quality of life and to bridge the digital divide, fulfilling one key area addressed by the Government’s ICT policy.”

iCard is the second NFC based solution following the NFC fuel management solution and is an outcome of Mobitel’s multi-tenant and state-of-the art NFC platform infrastructure that is ISO/IEC 18092 and ISO/IEC 14443-A compliant. The iCard solution will be expanded to a number of schools in the near future, in order to increase efficiency in administration duties. Following the launch of the initial phase, the functionality of the iCard will also be expanded.