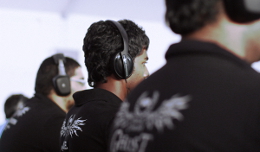 It’s no secret: Death Company has changed. DC, founded by a group of old-school MMO gamers, quickly rose to fame in the local eSports scene, eventually establishing itself firmly as one of the oldest surviving clans in Sri Lanka and one of the top contenders for all titles year in and year out.

Recently, following a complete change in management, DC reinvented itself as Xiphos eSports (Xiphos from the Greek word for sword).  Daelin, Anoren, Munky and Hades stepped down, tobe succeeded by a new set of leaders with a redefined vision. We caught up with Shanil Wickramasinghe, aka Daelin, to cast some light on this generational makeover.

Death Company was a clan that was first conceptualised by Lohita (aka Anoren) and I, during one of those late-after-school walks home. We visualised a clan that was more than the mere “I lead, you follow” clans that were prevalent at the time. We wanted to be a uniquely Sri Lankan clan, that had its own personality. When we entered university, we were both part of another clan, founded around fantasy MMOs – the Mithril Knights (MK).

We stayed a few years in the clan, where I rose to a high council position as a Divisional Leader, and Lohita became a behind-the-scenes diplomat. At some point during our stay at the MK, we felt that we wanted to head in a different direction, and also that what we wanted to accomplish with DC would clash with what we have at the MK, so we announced our resignation from MK and formally left within the following week. In a few months, after inviting Teague, Radeepan and Naveed in on the idea, Death Company was founded, along with Teague (aka Munky) and Radeepan (aka Blade), who was then succeeded by Naveed (aka Hades) after the former left to create and manage his own clan).

2) What were DC’s initial goals? Did you achieve them?

DC’s initial goals were simple: fun and family. We emphasized on people to have fun more than anything else, and we encouraged a sense of camaraderie among our members. Whatever came afterwards were just added onto two these two original goals. The way DCers enjoyed their game (competitive or otherwise) and the way they bonded with each other (ingame and out), just proves how well it works. We put competitive play second and although we encouraged winning, it was cool if you couldn’t. Aside from fun and family, we also set out to be Sri Lanka’s first clan to be registered with GLK, as well as the first clan to be properly organised and managed. We accomplished the former, along with KTHX, and the latter, well, we’re still known for our management structure to this day.

3) What was DC’s management structure – and how did that come to pass?

We started DC with a table of 4 leaders, with a mandate to agree on matters rather than just vote. With 4 divisions, we had an idea to base each division on a card suit, and thus the entire clan’s structure became based on a pack of cards.

In order of their appearance on the logo: clubs, spades, diamonds, hearts. Clubs would manage and oversee the skills and skill-related aspect of video gaming, hunting for talent outside the clan as well as nurturing the ‘home’ talent. Spades would be responsible for the administration and leadership of the clan as a whole, as well any legal issues should they arise. Diamonds would be in charge of DC’s events and their management, as well as clan finances. Hearts would be in charge of DC’s public relations, inter-clan diplomacy and internal conflict resolution.

4) What was DC’s greatest moment, in your opinion?

Our first top 3 ranking on Gamer.lk….and also the time when Death Company ruled an entire popular Lineage 2 server. We were the ‘master’ clan with about 50 members, holding the most popular town ingame – against many other clans with members numbering in the 100s. 25 of us laid siege to that castle, in a battle that lasted over 3 hours, against a defending force of 80.

We then successfully defended the castle from enemy seige more than once, the longest being a 3 hour battle against some 100 odd players from an enemy alliance; our defensive force stationed in the keep at the time had about 30 or so. Blade and myself led as field commanders in pretty much all the battles with Anoren and Munky leading smaller units….that was it for me personally, cos the feels you get when you win those situations, and when you look and what you have won – it was surreal.

5) How did the clan and its goals change over time?

There was very little change, if at all. There was a case during our early heights, where a segment of the clan split off to focus on competitive play. This dented the clan spirit slightly, and in some cases even upset the balance of the local scene, however our objectives didn’t change. In fact, the reason the split happened was because half the clan didn’t want to deviate from the goals set down at that time – which emphasized fun and family over competition 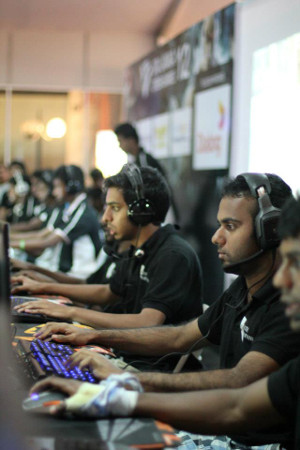 6) At what point did the clan leaders decide change was needed – and what was the trigger for this decision?

In early 2013, during a meeting over TS – which was initially planned as a pre-preparation meeting for DC’s next LAN party, I tabled a motion for the four Aces to take a year-long leave of absence, due to many commitments in our private lives (we had reached that point in life where we just could not put them off for longer), after which we will then review the clans performance to date, investigate and improve the current structure with as much efficiency as possible – with a new more commercially sound visual identity (DC wasn’t exactly a layperson-friendly name), and then appoint one or more new leaders, and retire to advisory positions.

This masterplan was intended to address DC’s issues in terms of management and organisation, in one smooth sweep – as well as allow the current 4 aces to be succeeded. Sadly and regrettably, due to one reason or another, the delegated responsibilities for 2013 were never carried out and while the 4 aces were AWOL, DC stagnated and many of its decisions ended in stalemate.

Towards the end of Dec 2013, the 4 aces and some internal managers and administrators discussed ending DC’s run as well as its identity after the next tournament, and appointing new leaders to form a new identity on the spot. In short, it wasn’t just time for the Aces to be succeeded; it was a time for the entire clan, as a single unit, to be succeeded.

7) DC now goes under the name of Xiphos. Would you call Xiphos a continuation of DC, or an entirely new clan in its own right? If so, what is its new direction?
Calling it a continuation would not be fair to Xiphos’ leadership. Xiphos is taking over where DC left off. Personally speaking, for me – as one of the original founders, DC is no more. It is dead. Xiphos, is stepping in lifting the banner and sword that DC once held. I have not yet read Xiphos’ constitution nor profile, so I’m not sure of what their new direction is – although I assume it’s competitive.

8) Who are the new administrators of Xiphos? How did the leadership change go?

Xain (Rushan), R_L (Ramesh), Smoke (Mayuran), Champ (Hiran) were the ones we saw being appointed at the meeting. I’m not aware if anyone else has been appointed as part of the leadership since then.

The whole transition process was smooth – no hiccups. Everyone listened to everyone else. Feedback was constructive. Outstanding issues were addressed. Everything happened exactly how it should have.

9) How would you differentiate DC and Xiphos to an outsider?

DC is the past – the history and the legacy. Xiphos is the future – the plan and the vision.

10) What do you see in store for Xiphos in the future?

Right now, Xiphos is still in the middle of getting itself sorted out. Xiphos is a clan of great talent, headed by people who have much talent themselves. With proper management and timely planning, it will have no problem rising to #1 in the country. It has a lot of potential.