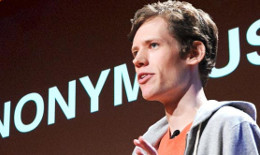 Eleven years ago, something momentous happened: 4chan was born. Three days ago we, the Internet, were told that moot, the iconic founder and administrator of the world’s most notorious website, is stepping down.

To the uninitiated, 4chan is the back page of the Internet. It’s where Redditors fear to tread. 4chan began life as an English clone of 2chan.net, modeled closely upon Japanese imageboards that buzzed with anime and discussions. It quickly gained popularity, and over the course  of a decade its members have been responsible for giving the Internet much of its subculture – pedobear and the obsession with cats are just the start of it.

Over a billion visitors have dropped by, participated in, and perhaps changed a some part of the Internet through 4chan. Indeed, 4chan has been called many things – from “yet another image board” to “the birthplace of Anonymous”. It’s also been called a hacker, a hacktivist, a rogue system administrator by the “experts” over at CNN.

Anonymous 01/22/15(Thu)18:27:57 No.15307807▶>>15307588 (OP)
i saw a person die for the first time when i was 12, i was living with just my mother, woken up by the phone one morning and looked into her bedroom to see her having a heart attack. It’s a strange coincidence that the phone woke me up to see that happening. The most vivid thing I remember about it is the moment she stopped moving and her eyes were still open, and it clicked in my head that she was dead. “


4chan begins with moot, the once-secretive founder of the site. moot (always lowercase) was Christopher Poole, then a 15-year-old student from New York, obtained the source code for 2chan – the Japanese Futaba Channel – and set up a site with two boards: /a/ and /b/. /a/ was Anime / General. /b/ was Random.

Over the years, Poole added and removed boards, and users rushed to fill in the content, turning the once-anime site into a hotbed of Internet activity. It was later called “the ground zero of Western Internet culture”.  Everything from Wallpapers to Pokemon to nudes and LGBT boards found their way in, eventually making six broad categories – Japanese Culture, Interests, Creative, Other, Misc and Adult. 4chan reads like the sum totality of humanity. In these boards are thoughts of madness, depression, racism, crime and abuse; advice, counsel and guidance; raves on politics, ethics and society drowned out in babbling laughter and cat memes. “It challenges every Internet convention: it is, alone, the antithesis of Google, social networking sites, and blogs” wrote one reporter in 2010.

It is, however  /b/ – the Random board – that would truly make history. 4chan, by default, does not require registration. Users, unless they choose otherwise with tripcodes, post as “Anonymous”. In /b/ Anonymous took on an altogether more menacing feel, that of a hivemind, and out of this came some of the greatest hacks of this decade.

Why do I still have feelings for you even after it’s been 2 years since you rejected me? Nothing even happened (because I blew the 1 chance I got). I know I need to just get over it and move on and I keep trying to force myself to, but it just doesn’t work. How can I like you so much and at the same time hate you.

By all accounts, keeping the site running was difficult for Poole. For one, it was expensive. 4chan’s massive userbase makes it a very high-bandwidth creature, very expensive to maintain, and at one point in 2009 Poole was $20,000 in debt.

Secondly, he was highly secretive, keeping a careful divisor between his personal life and the hivemind of 4chan; indeed, when moot first revealed his name, many in the mainstream media thought it was a hoax. Eventually, post-2009 Poole was accepted; moot was real.

I seriously hate reddit, everyone there is so cliquey and elitist, you can’t post anything without being criticized for no reason. Every community is so jaded, if you disagree with ONE person you’re alienated while the other person is praised for being the least offensive. On the other hand, if you agree with the community, you’re lauded. It’s like high school all over again.

4chan is so much better, everyone’s on even ground, there is no community, there’s no niche or clique, it’s just words a on screen, and no one takes it any more seriously than that. It’s what the internet SHOULD be.

Since then, Christopher Poole has given interviews, spoken at TED, and generally been one of the most influential people that you’ve never ever heard of. He’s also earned a PhD. He had a startup called Canvas.

Yet for all this, he still barely shows up on the internet – a Google search returns many Christopher Pooles on the first page, none of them moot. It tells you a lot that in almost every interview, he spends more time talking about 4chan than about himself.

On the 21st, Poole announced his retirement in a blog post titled The Next Chapter. After a decade and a half of service, he says, it’s time to move on.

“4chan has faced numerous challenges over the years, including how to continuously satisfy a community of millions, and ensure the site has the human, technical, and financial resources to continue operating. But the biggest hurdle it’s had to overcome is myself. As 4chan’s sole administrator, decision maker, and keeper of most of its institutional knowledge, I’ve come to represent an uncomfortably large single point of failure.”

That said, Christopher Poole has no idea what he’ll be doing next. He needs to decompress, he said in an interview with TechCrunch. He’s stopped using social media. After years of being the loneliest webmaster in the world (his own words), moot is ready to step down and let the ship sail on. 4chan, meanwhile, is tarnished – there are other “chans” on the web, free from what many see as “the mootocracy”.