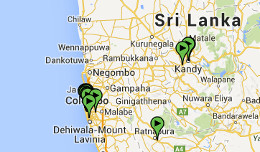 According to the Ministry of Foreign Affairs, Telecommunications and IT, from today (30th of March) onwards you can enjoy free WiFi at 26 public locations (see http://www.freewifi.lk/). Exciting, right? Yes, it is. Now here’s the part where we tell you that the connections are slow and capped.

Each location has a 512kbps connection and each user at said location only gets 100MB per month. Then there are the technical issues that plague free public WiFi everywhere. If you’re thinking of torrenting the latest episodes of your favourite TV show, you might as well stay at home.

Now the 26 locations where you can find this free WiFi are:

The initial plan called for the facility to be implemented at 250 locations by the end of March. We’re guessing the number dropped due to the practical difficulties of implementing free WiFi networks. Either way, we might actually have 1000 WiFi locations across the island around August, which might possibly fill a nice checkbox on the road to development.