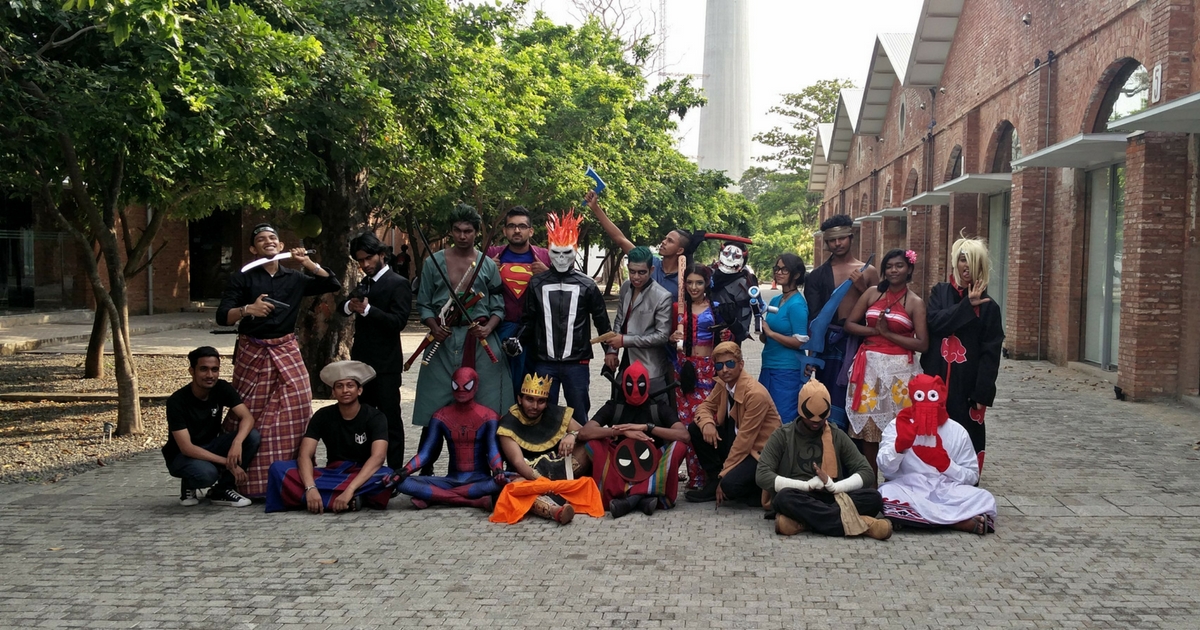 The first event for the day was the Daredevil Mutti Challenge

Take your usual Kana Mutti challenge and add a few blindfolded cosplayers and what do you get? You get a Daredevil Mutti Challenge. In this game, cosplayers would be blindfolded and line up in single file.  They would be then handed a pole (akin to what the attorney by day, vigilante by night Daredevil uses) and told to walk towards a contraption that consists of three hanging pots. The goal? To attempt to hit one of the pots. Sounds easy right?

Well it’s not so easy when you have Deadpool distracting you with random comments. Hilarity and random bouts of chaos ensued as cosplayers would either hit the pots or attempt to hit people in the immediate vicinity. From direct hits to almost killing people (just kidding), the game was indeed a great hit.

You’ve probably played “Pin the Tail on the Elephant” or “Pin the tail on the Donkey”. Well, this involved pinning two nipples on the Caped Crusader. The reference here is that batsuit that was used under the direction of Joel Schumacher had a bit of an emphasis towards this area.

In a rather ironic twist, we had Spiderman attempt to give justice to the nipples of the silent guardian, the watchful protector to draw the nipples that he deserves, and not the nipples he needs.

This involved the cosplayers each getting into a sack. Once in the sack, they had to hop a distance of 10 meters towards the contraption used previously for the Daredevil Mutti Challenge which now had a number of suspended buns. Once the cosplayers make it to the buns, they have to get out of the sack (without dying or grievous bodily harm), and then eat a bun using only their mouth and teeth and no hands.

The game was later changed to where the person is given a balloon and then must blow and pop the balloon. The person who manages to blow the balloon the fastest and pop it first must then run towards the buns and eat it.

Roped in for a Tug-O-War

Featuring the Organizers of Geek Avurudu Celebrations vs the Cosplayers, this was the traditional tug-o-war. If you don’t know what that is, this is where two teams hold onto a thick rope and attempt to pull the opposing side towards them.

The Organizers certainly had their work cut out for them and had to make sure to pull their weight in order to ensure victory. But in the end, the collective efforts of the Cosplayers paid off as their strength carried them towards victory.

The Avurudu Kumara & Kumariya competition was up next

This was a showcase of the cosplayers skills as the character they’re dressed up as.

The judging criteria was based on points such as creativity, how thought out the costume was and how much effort had gone into it. Just to get into the mood of things, some of the characters were asked to face off against each other. We had a faceoff between John Constantine and Ghost Rider, a Mating Dance by Dr. Zoidberg, some fancy gun plays by John Wick and even a few fancy moves from our neighborhood friendly web crawler, Spiderman. It was then time for the crowning of the Avurudu Kumaraya and Kumari.

With that, the Geek Avurudu Celebrations for the year 2017 officially drew to a close.

Overall, the Geek Avurudu Celebrations were well organized. There were a few hiccups at the start such as the event getting late to kick off and also the heat of the moment (literally) as the surroundings offered little shade from the searing heat that we’re going through. No doubt that the event was filled with laughter, some awesome cosplays and a sheer celebration of geekiness, but they could have added a few more games as well. All in all though, Kudos to the organizers and we wish them all the best for the 3rd iteration of the Geek Avurudu Celebrations.