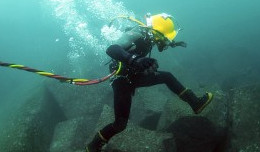 Google has just announced that they’re going to build a network of cables stretching all the way across the Pacific – a network that can carry a whopping 60 Terabits of data per second. A series of cables will go all the way from western USA to Japan, crossing Asia as it does so. Not surprisingly, it’s called FASTER, because it is faster than just about everything we’ve seen before.

Behind FASTER is not just Google, but some of the world’s largest telecom giants – Japan’s KDDI, Singapore’s Singtel, Malaysia’s Global Transit and China Mobile International and China Telecom Global from, well, China. Together, these industry juggernauts make up the FASTER consortium, which right now is getting a lot of media attention because Google’s involved.

The cable itself, a 6-fiber-pair system supporting optical transmission at 100Gb/s x 100 wavelengths on each fiber pair, will span a whopping 9000 kilometres and will be supplied by NEC.

Initial figures place the cost around the $300 million mark. It will connect San Francisco, Los Angeles, Portland and Seattle to Shima and Chikura in Japan. Branching connections will be made to neighboring cable systems across Asia, giving the whole area a shot in the arm, so to speak.

“At Google we want our products to be fast and reliable, and that requires a great network infrastructure, whether it’s for more than a billion Android users or developers building products on Google Cloud Platform. And sometimes the fastest path requires going through the ocean. That’s why we’re investing in FASTER, a new undersea cable that will connect major West Coast cities in the US to two coastal locations in Japan with a design capacity of 60 Tbps (that’s about ten million times faster than your cable modem).”

The FASTER network is scheduled to go live in the second quarter of 2016. Once it does arrive, an ideal world would see our data getting cheaper and faster. Unfortunately, it’s not an ideal world, so we’ll just have to wait and see.