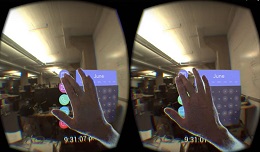 The Leap Motion, when released in 2013 caused a lot of hype to gamers and developers alike. It primised to offer new ways to interact with your PC and even your favorite games. However fast forward to 2015 and there I has not been much development in that area. Sure the demos and apps in the Leap Store app store are cool but that has been pretty much it. The SDK has bene out too but that too has not had any developments.

Recently however, a few developers have teamed up to create a tool that merges the Leap Motion with a virtual reality headset.

Basically think of it as the Leap Motion plus an Oculus Rift. Yes you read that right. The new tool promises to bring a whole new level of augmented reality computing.

Initially created as a project for a hackathon based on Leap Motion, the video shows the user operating a seemingly floating material design-ish menu comprising of square computer interfaces. A bit later on in the video, the user accesses a calendar app from a floating dock that also seems to include options for phone calls, email, chat and video.

Specs wise, the interface makes use of Oculus Development Kit 2, a prototype Leap Motion sensor and a camera and was developed by a team of Leap Motion engineers.

Raffi Bedikian, one of the engineers explained how cool it would be to have one’s virtual workspace anywhere at any given time even on top of a mountain or in the middle of a lush forest due to its portability. In addition wearing the headset would literally block out the outside world, thus keeping you on track and focused.

One really cool aspect of the video was when the user is able to navigate within folders of his/her desktop and move open folder windows across the workspace giving one the feeling that Iron Man’s Jarvis interface is indeed possible. Also the fact that you can watch videos on what seems to be an augmented reality video screen floating in mid-air helps too.

Sadly though the demonstration is just an experiment and the team is yet to announce any future plans for the project. Although, considering the innovative features it appears to offer, the Leap Motion team may want to consider this as a viable option to promote their product. Just as long as you don’t walk into any walls while doing your work or watching a video.

I for one would really like to own one, provided that it’s in my budget.

Thoughts? Comments? We would love to hear from you.