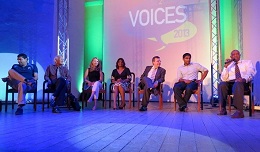 “What do I study?” and “Where should I study?”, these are a few, tough and common questions that plague students who finish A/L’s and are about to head off to university, since there are so many options available these days. With so many options how does one know what’s the best option? That’s what SL2College tried to answer at SL2College Voices 2013.

The event kicked off with the hosts, Mr. Arun Dias Bandaranaike and Ms. Sharon Dinasha Stephen taking the stage to give a welcoming address. Arun commented that this was a pioneering effort, followed by Dinasha who gave a brief introduction of the 1st speaker of the day, Mr. Dian Gomes and kicked off the morning session. 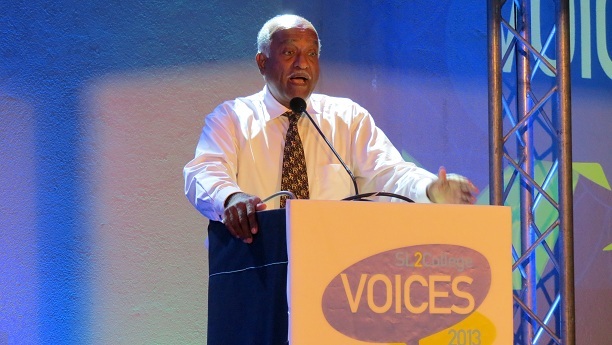 Dian Gomes – “Never give up”

Dian gave a speech that was focused on primarily 2 things: not giving up in life and leadership. About leadership, Dian explained 5 principles which he believed leaders should have, and stated that it’s important to emotionally connect with people in order to successfully lead them.

When it comes to not giving up, which was the highlight of Dian’s speech, he shared experiences from his boxing career, particularly the story about Sri Lanka’s grueling 9 year journey to box at Olympics, the moral here being to never allow people to give up.

Dian wrapped up his speech by explaining the 2 rules we should follow in life, rule #1: Learn to be humble, rule #2:  never give up in life no matter what. Following Dian, the 2nd speaker of the morning session was Dr. Sanjiva Weerawarana.

Sanjiva’s speech focused selecting a study area, where he stated “There is no one best area”, but it is important to select one that you’re passionate about, if not, at the end of the day you may not be happy with yourself for the next 40 years or so.

Sanjiva also commented on the Asian mindset that even parents in Sri Lanka have adopted, to push A/L students to become engineers or doctors, stating “That’s just flat-out wrong.” After Sanjiva’s speech, a tea break was called into order where refreshments were served. Following the tea break, the 1st set of panel discussions kicked off. The 1st speaker of the morning panel was Mr. Asanga Abeyagoonasekera.

Asanga spoke on the importance of serving the country, stating that instead of leaving the country due to the various issues facing it, we should stay and fix it, and in order to do so; we should adopt an emotional mindset. Afterwards, he moved onto speak on leadership, which he said doesn’t come naturally to everybody and that we should train ourselves to become leaders. Asanga wrapped up his speech later on, after stating that we need to communicate with the rest of the world to become leaders. 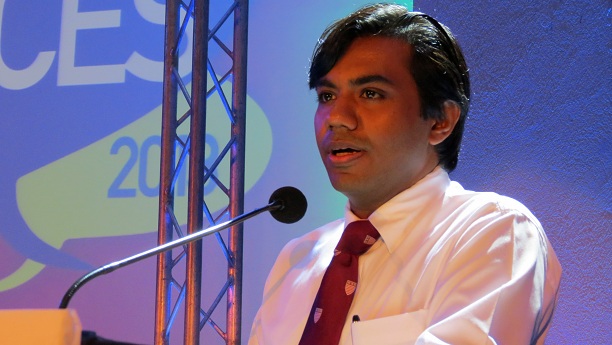 The 2nd speaker of the morning panel was Professor Ajith De Alwis. Ajith began his speech, by talking on the importance of reading which according to him, was disappearing. He then moved onto talk about selecting, a study area that we are passionate about like Sanjiva did, by giving an example of one his former students. Ajith later wrapped up his speech, after stating that decision on what to study shouldn’t be based on the salary that can be earned, and self-learning is important. 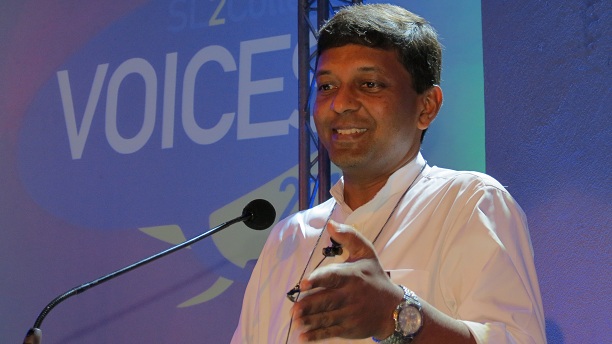 Arj Wignaraja – “Value the people around you”

The 3rd speaker of the morning panel was Mr. Arj Wignaraja. Arj kicked his speech off, by talking on how the environment we are in shapes us and then moved onto how we should find and treasure the people we consider as our mentors.

Later on, he also talked about the importance of selecting a field that we should be passionate about and stated that if we should commit to such fields early and when we do, we should pour all our effort into the work of that field. Arj then wrapped up his speech after speaking on the accomplishments of WS02, as an example of world class Sri Lankan businesses. 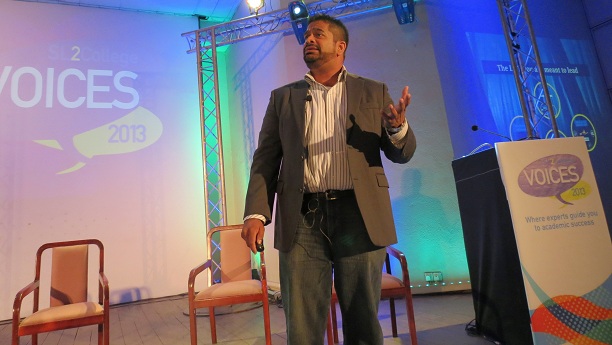 The 4th and final speaker of the morning panel was Dr. Sujatha Gamage. Sujatha began her speech, by saying that we should travel to get experience and according to her, experience was important in order to stand out.

She also spoke on the importance of reading, like Ajith did in his presentation. Later on, she wrapped up her speech after stating the things to look at when selecting a university: legitimacy of the board of study and track record of the institution. 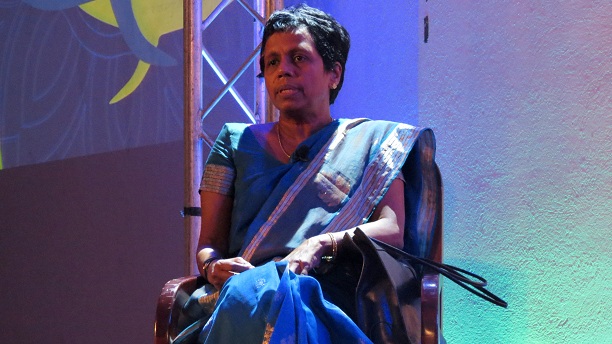 Following Sujatha’s speech, the 1st Q&A session of the day began, where attendees had two ways of submitting their questions: writing it on a piece of paper and passing it or get a mic from the volunteers and have the spotlight on to ask questions.

While the Q&A session didn’t see many taking the mic, a large number of papers were sent to the speakers containing various questions. In fact, at the end of the Q&A session, when Arun announced that we’ve reached the lunch break, there were still a number of questions remaining. 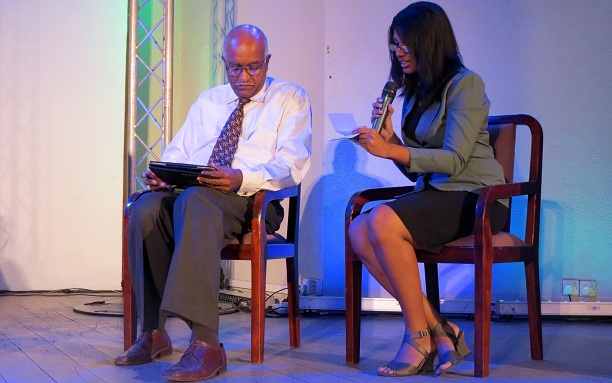 Following the lunch break, the 2nd panel discussions kicked off with the speakers: Ms. Nelum Senadira from The US-Sri Lanka Fulbright Commission and Mr. Charitha Ratwatte which ended with another brief Q&A session.

Later, the 3rd and final set of panel discussions began. The 1st three speakers of the panel: Mr. Michael Carter from Austrade, Ms. Laura Romva from the EU Delegation and Ms. Niroshi Sirivansa from The British Council, all focused on options to study abroad.

Michael’s speech highlighted the advantages of studying in Australia and he recommended www.studyinaustralia.gov.au as a useful website to check out Australian universities. Laura spoke about the Erasmus Mundus scholarship program for Masters and Doctorate students, looking to study in Europe. Lastly, Niroshi talked about the advantages of pursuing a degree from the UK. 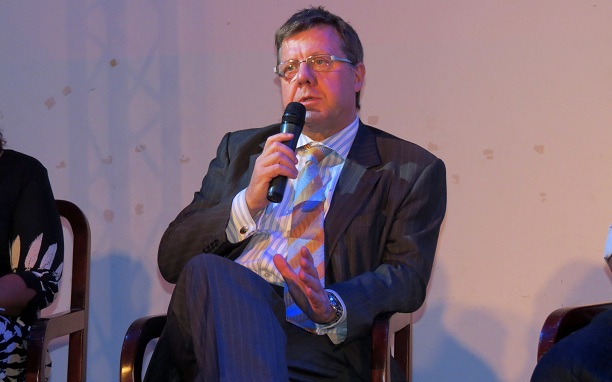 The 4th and final speaker of the panel was: Prof. Arjuna Aluwihare, Emeritus Professor of Surgery at the University of Peradeniya. Prof. Arjuna kicked off his speech, not by taking the stage like the other speakers, but instead walking around the hall where we were all seated and talked about how the quota system prevents a lot of capable students from entering the universities.

Prof. Arjuna then moved onto talk about, the issues with going to other countries to study for a degree, stating that parents never admit to missing their children and different countries will have different methods of respecting law & order. He also stated, “If you go to a university abroad and don’t come back, Sri Lanka will manage just fine, you may not.”

He later wrapped up his speech, stating that we should be able to adapt, especially so if a student is planning on going abroad. After his speech, the 3rd and final Q&A session began. This Q&A session not only saw a large number of questions being sent via papers, but there were also a few attendees who took the spotlight taking a mic and directed their questions at the speakers. 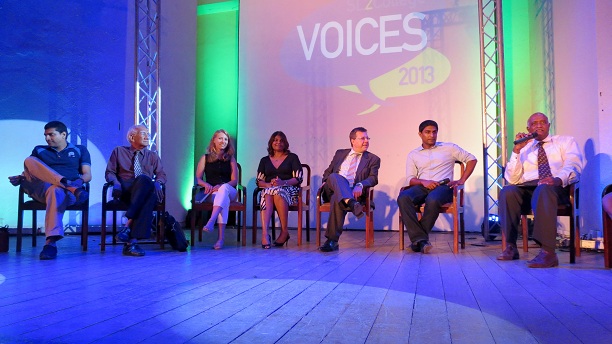 Following the Q&A session, SL2College founder, Mr. Nayana Samaranayake took the stage to thank everyone that made the event possible and added that we should all do some volunteer work from time to time and not just our day jobs, like the hard working volunteers at the event.