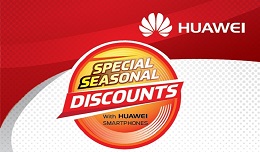 Huawei, whose Mate 7 we reviewed some time, ago, may not be a popular brand of smartphones here in Colombo, but it looks like they’re growing pretty fast: IDC recently ranked them as the number two smartphone brand with some 18% market share in Sri Lanka.

In any case, they tell us that they’ve got some special discounts planned for Avurudu. Customers can purchase smartphones with discount rates of up to Rs. 9,000 from Singer outlets and authorized retail channels. We checked Singer, and it looks like certain models have very steep discounts on some older models.

According to the Country Head, Consumer Business Group (BG) Huawei Device, Mr. Henry Liu, Sri Lanka is one of Huawei’s fastest growing markets in South Asia, and their strategy is to connect consumers on a special occasion like the Sinhala and Tamil New Year celebrations.

Though if they had discounted the Honor 3C or the Honor Holly (which make stellar smartphones for around the Rs 20,000 region)….well, that might have made one epic Avurudu treat.