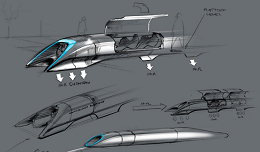 Elon Musk, founder of Space X and chief executive of Tesla Motors announced back in 2013 that he could build a transport system that could in theory reach speeds of up to 700 miles per hour. The system, dubbed a “Hyperloop” could transport passengers between Los Angeles and San Francisco in less than 30 minutes (that’s less time than it takes to deliver a pizza in the US), thanks to an innovative design described as being a combination of part Concorde, part Railgun and part air hockey table.

So essentially passengers sit in cars that are then launched down a tube which had had most of its air removed. A system of magnets would accelerate and brake the capsules, and also keep them from touching the sides of the tube. How much would it cost you ask? Well, a passenger-only model would cost about $6bn.

The Hyperloop Transportation Technologies, a crowd-funded California-based project has already begun thinking about how such a system could be constructed, although a working prototype is yet to be seen

Musk also tweeted that he would most likely build a test track for his Hyperloop Texas and that he is even thinking of using the test track to hold annual pod racer competitions. With an expected length of about 5 miles, passengers and would be racers would be in for the ride of their lives (literally).

A bug in Australia’s network

If you are an Australian living in Queensland, then you probably heard about you fellow neighbours who were woken prematurely due to a bug in the mobile networks. The bug essentially caused smartphone alarms to trigger an hour earlier than desired leading to a whole lot of yawning and overall grumpiness. It was later discovered that the bug was caused by computer systems accidentally adjusting the devices’ clocks to daylight saving time (Queensland ditched the switch to DST in 1972, thereby putting it an hour behind New South Wales for part of the year). Those affected include subscribers to Virgin Mobile and Optus. The ABC news network even reported that some customers set off for work without realising there had been a mix-up, causing earlier-than-normal traffic on the roads.

So what did those responsible do? Well, Coffee seemed to be the answer. Optus decided to give free coffee to all affected customers whilst Virgin offered to deliver a meal to vulnerable people living in Australia if users uploaded pictures of their own morning lattes.

It would be a good ruse to get free coffee if it happened in your own town wouldn’t it?

WhatsApp Plus, More than meets the eye?

If you’re a major Android fan who likes to get down and dirty with all things Google related, then you probably would have heard about this app. Essentially a modified version of the popular IM app WhatsApp, WhatsApp + offers 700 new themes, more emoticons, and better privacy. Seems good right? Well maybe not

According to mobile and tech news site BGR, WhatsApp Plus is not genuine and is in no way associated with Facebook-owned WhatsApp. There’s a bit of a controversy going on as BGR reports that the original domain that is WhatsApp Plus is not registered by WhatsApp, Inc and that even in the APK or application itself, there exist links to malware infected websites which according to them hints that the app is communicating with illegitimate sources. They also advise readers not to download the app, or any app which claims to be WhatsApp Plus. The readers on the other hand are raising an outcry for unjustly accusing the WhatsApp Plus developers as it is anyway a modification of the application and thereby would have no affiliation with WhatsApp either,

Are you using WhatsApp Plus? What would your take on this be?