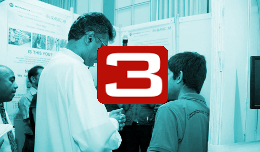 [box_dark]Thought that was it? No, wait: there’s more, not to mention the winning titles. [/box_dark]

Now here’s a system we’ve seen before, specifically at Cutting Edge 2013: however, it looks like a completely different beast this time. The Ez-Recharge we saw doesn’t just simplify the process of getting a reload to your phone, now it also works as a fully functioning POS system.

According to the team members, Ez-Recharge is aimed at communication shops as well as supermarkets and they claimed it would cost Rs. 32,000, roughly half the price of all the other reload machines currently available.

Another working system by another innovative team: hopefully the plans of commercialization mean that we’ll see this in the near future.

Up on fashion – SLIIT

You go to a clothes store, you pick an outfit, then you try it. If it doesn’t look good then you reject it and go pick something else. This is a cycle that each outfit in a clothes store has probably been through at least once.

Up on fashion comes in attempts to answer the question as to why some clothes get rejected more than others, as well as track sales and make future predictions. The system involves placing RFID tags on all the clothes and having a basket near fit on rooms for the rejected items.

The system would also have a touch panel placed inside the fit on rooms, which shows a catalogue allowing customers to select another item. Using the all the data from what clothes enter the rejection box and what customers select from the catalogue, the system tries to identify what items will continue to be rejected and what items should be stocked in the future.

The team claimed actually tested this system at Mondy and the system was able to forecast future sales with 79% accuracy from prime forecasting model.

This is precisely what the title implies.  The system consists of two devices: one that is installed at the railway gate and another that’s installed on the train in the driver’s carriage. The device in the driver’s carriage broadcasts a signal via wireless RF transmission, when the train is within the 1km range of the device at the gate which is calculated by the GPS tracker, the gate is closed.

Unfortunately, it won’t prevent suicides, but by eliminating a human element it makes things marginally safe.

Here’s a system that handles a problem that we face daily: traffic. Currently traffic lights are – well, we all know how efficient the process is. Green on demand seeks to automate the process of managing traffic lights.

We won’t go into hard details, because this system is still a-ways from implementation. Apparently it also gives priority to emergency services.

Onward to the final submission: An app which would show the buses on the route you enter, and the distances the buses are to you.

Additionally, inside the bus there are LCD locations which display ads based on the location the bus is in at the moment. According to the team members, while they do have plans for commercialization, they need investors. Hopefully they’ll get them so we won’t have to wait for ages for buses.

Out of the eighteen that you just read about, three made it big. Give yourself a clap on the back if you predicted these winners of the the Motorola SLASSCOM Inter-University Innovations Championships:

You’ll notice quite a few noble ideas were brushed aside in favour of EXMS. The reason given was valid: in the real world, we need applications that are commercially ready as soon as possible.

Of course, three winners don’t mean the other fifteen are impractical – hardly. Who knows what may bear fruit in the future? It’s a great thing that Motorola and SLASSCOM have made this event possible – five years down the line, we might be stopping our cars to automated traffic solutions, shopping through Up on Fashion and punching in our reload cards through Ez-Recharge. We just might.