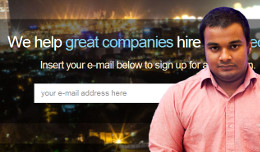 I’m Nadeesha, one of the guys behind hirewire.lk, and I noticed you signed up for our app sometime back. I just wanted to check in and see if you need any help with the platform. Or if you have any suggestions for us?

We help employers interested in you find you even when you don’t apply to a job the traditional way. In short, we provide an interface for companies to sort of “google” for the exact person they want. And we provide our job seekers (like you) a way to insert the minimal required information in a CV, and keep it in our system. And we do it in a way we don’t disclose your private details.

That’s Nadeesha Cabral, the unassuming, down-to-earth, self-confessed caffeine-fueled coder who greets everyone who signs up for hirewire.lk. Nadeesha is a full-stack Javascript hacker, emigrating out of a lot of .NET and Oracle stuff into a life of Javascript at WSO2.  He’s also the co-founder of hirewire, and with his partner, Javid, he regularly stays up until the small hours working on making it better.  We quite like what they have here – a really slcik, minimalistic solution that doesn’t muck around – but what exactly makes Hirewire special and makes Nadeesha and his partner keep ticking? Let’s find out.

What is Hirewire.lk? How does it work?

Nadeesha: In one sentence, it’s like eHarmony for companies and job seekers. As for companies, we provide them who had signed up with us an algorithm which they can customize to sort of zero-in on the ideal candidates who are on the platform. On the job seeker’s end, anyone can create a profile with us. Companies can lock on their candidates through our platform and if they both consent, their data is exchanged through the platform. It’s meant to be precise.

We don’t offer any sort of a social component, and our philosophy revolves around anti-engagement. What that means is we make it really easy for you to build up a profile, and we don’t need you to stay around, “like” statuses and send messages to make it all work. There are other sites which are really good at engaging users like LinkedIn, and we don’t want to compete with them.

We just make it really easy for companies to find the people they want, and for people to receive relevant job offers while maintaining their privacy and sanity.

Who’s behind Hirewire? How do you see Hirewire at the moment – is it a full-time project or a hobby?

Nadeesha: I started it as a hobby almost 2 years back. The first write was in ASP.NET MVC and ran on Azure Services. Then along came Javid, my co-founder who thought this could really be something worthwhile. So I started a more serious re-write in Javascript. He does all the bizdev and pitching while I focus on the code and tech. (Although I occasionally pitch-in for bizdev). At this time, we’ve got a bunch of companies who are testing us out. After a certain point I guess it feels like sitting on the Iron Throne. Uncomfortable, but necessary.

Any new features in the works?


Nadeesha: Well, apart from what we already have, we want to add a couple of features which will make it easier for users to build up their profiles and CVs. Because one part of our mission is to help our users bring out the best of their professional experience and get noticed, whether it’s inside of the platform, or outside.

Also, we’re working on a few features that will make companies make better strategic HR decisions from the data we already have on our platform. <Sorry to be so vague here. I’m really excited about some of the tech behind these new features, but it’s better to demo a working idea than blow hot air>. We’re not profit oriented, or rather, we strive not to be so. If a user or a company recommends us a feature, then we’d take it seriously. Two of the features we implemented last month had been due to user feedback. At the end of the day, we hope to end up with a product that works and is usable.

I think it helps to have people who understand that you want to zone-out, do your thing and keep typing away at your keyboard for hours at a time

Now on the competition front – there’s already a ton of job sites and of course, LinkedIn. How do you intend to draw people from those sites onto yours?


Nadeesha: Well, we don’t – yet. Since it’s been private beta, we had not concentrated our efforts too much into marketing. There are a few “traditional” job sites having a bidding war on Google AdSense with their massive marketing budgets. We have chosen not to fight that battle.. And granted, this is the biggest hurdle before us. So far, a super simple sign up page had helped.  We get a few hits from Facebook since we have put some money there, but we haven’t been too happy with the results. We’ve decided that we want to Heisenberg this up and try something different, and we’re cooking up a few things, examining ideas – if anyone has good ideas on helping us out, we are all ears and we are prepared to make it worth your while.

How do you intend to monetize it?

Nadeesha: Right now, all of our money comes from a small till Javid and I keep. We fill it with 5 rupee coins whenever we can and it gets pretty heavy sometimes.

On a serious note, almost all of our money will come from companies making recruitments and service integrations with our platform. There are a few awesome organizations who tied up with us and continue to do so. Plus we’re pretty selective on who we have on our platform. It will be free forever for the job seekers, at least all of the existing features.

In few years time we hope to do the whole world domination thing. Batman is already in on that.

One thing I really like about us is that we’ve spent absolutely no money on our tech and our infrastructure. We’re 100% independent, bootstrapped and based on open-source. The cool thing about our tech infrastructure is that so far it consumes less money than a Kottu Rotti and an Iced Milo to run it for a week. Although that’ll soon change. 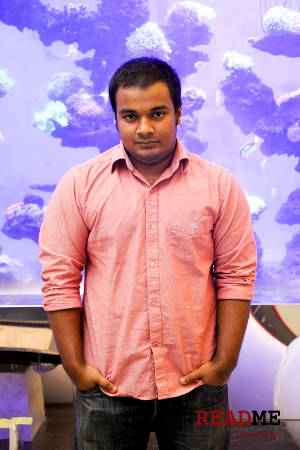 Where do you see Hirewire headed in the future?

Nadeesha: We know our business plan (there’s an actual doc that Javid maintains) is solid and so is our tech. I think our product/market fit applies well to where we’re competing, and we have our MVP out of the door. Hitting the critical mass is what some VC backing is useful for, we’re sort of looking from that angle these days.

How has all of this impacted work and other commitments?

Nadeesha: A lot. Me and Javid’s both. 80+ hour work weeks seem to be the norm for us since we really can’t drop our day jobs and still boostrap this. I think it helps to have people who understand that you want to zone-out, do your thing and keep typing away at your keyboard for hours at a time. I’ve hoped to see the light at the end of the tunnel, but I liked being in the tunnel so much so that I’m not sure anymore. Also, more coffee!

On the code side, you mentioned that Hirewire is purely Javascript. Why Javascript? Also, what were the problems, if any, that you faced in setting it up with JS?

Nadeesha: That’s right. We run on the MEAN stack. Mongo really worked for what we were going to do with data. And we wanted to have an API-first architecture for competitive reasons. We focused a lot on UX -mso there came Angular. Everything in MEAN just fell into place. We have open-sourced our front-end component written in Angular.js at ncthis/kodiak, in the hopes of taking out the good stuff and hosting them independently later on. The other real choice for us was Python/Flask. Also, GO/Martini was looked at, but we were somewhere with our app by the time the product it hit the streets.

“….it (hirewire.lk) consumes less money per week than a Kottu Rotti and an Iced Milo”

Nadeesha: There were no specific problems with JS per se, although our app kind of tested the limits of Angular. We’re trying to iron them out as we go on. Our Node.js clusters scale super-fine with load. I think Javascript sort of lets you go places faster. It worked well with our fail-fast, single-dev and rapid-prototyping approach. I am passionate about MEAN’s adoption by startups. I won’t go as far as to declare myself an evangelist. But if any startups out there want any help, just give us a shout.

Also, IMHO, Javascript is incredibly fad-driven – more than I’d like to admit as someone from the community – there’s still the “Javascript is not really a language” stigma in certain circles as well. In the interest of not starting up a flame war, let’s just leave it at that.