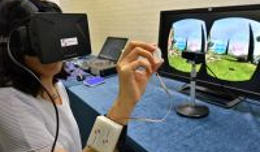 We’ve seen haptic feedback before, but usually in bulky simulators with huge, ungainly gloves clamped onto whoever’s doing the feeling. Useful for research, but not the kind of thing you’d walk into a store to buy. Miraisens, a high-tech Japanese firm, may be changing all that.

They’ve come up with a haptic feedback system that vibrates to create the illusion of resistance and touch from virtual objects – and, coolest of all, it’s not an ungainly mess. Rather, it’s so small and light that it can be build into the likes of coins and pens. Which means that not only can it be built into things like game controllers, it can eve be paired with everyday objects. Assisted by visual AR tech (Occulus Rift, anyone?) you technically have a whole lot of digital entertainment potential.

It’s not the first haptic feedback system, of course – in fact, there’s even a project called Neuron on Kickstarteraspiring to build a system that can be used to motion capture as well as VR and game interaction. Nevertheless, Miraisens seems to be the first to throw out the old glove-and-exoskeleton model and dream up something altogether more adaptable.