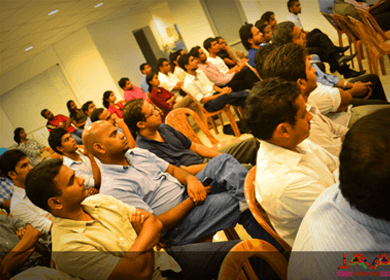 The 3rd Colombo Java meetup was successfully held on 19th July, 6:00 pm  at WSO2 with over 50 participants from various software firms.

The keynote was delivered by Hiranya Jayathilaka, senior tech lead at WSO2 on Handling I/O in Java,  followed by Amila Suriarachchi, Software Architect. The meetup was ended with a panel discussion by Hiranya, Amila and Prabath Siriwardena.

The panel discussion was  about the building blocks of SOAP based web services, like SOAP, WSDL and UDDI. Then spoke briefly on how to develop web services with Axis2 – where Amila also demonstrated  a sample. Further  discussion was on  WS-Discovery and how it makes discovery less complex with respect to UDDI.

REST was also another focused topic during the discussion. Hiranya explained concepts associated with REST and explained how it differs from SOAP – when to use SOAP and when to use REST. Also we discussed limitations in REST and it’s coupling to the underlying transport. Discussion finally ended up by talking about how to secure SOAP and RESTful services – where  about transport-level security and message-level security were spoken.

All-in-all it was successful a meetup!

Hiranya’s keynote could be  found here