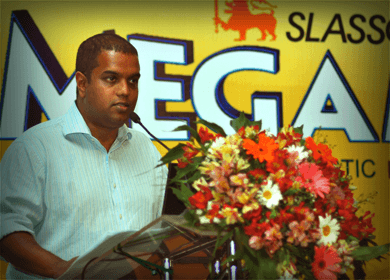 Megamind 2012, the trivia quiz competition organized by the Sri Lanka Association of Software and Service Companies (SLASSCOM), was held recently at the Park Street Mews Warehouse. The contest garnered enormous enthusiasm with entries from 41 teams representing 34 organizations from Sri Lanka’s IT and BPO industries.

The quiz held recently was the inaugural edition of the contest, but SLASSCOM have expressed their interest in making it an annual event. The winning team ‘Invictus’, from HSBC Data processing Lanka Ltd, took home Rs. 50,000, while the runner up and third placed teams ‘Amba Green’ of Amba Research and ‘Team Dialog’ of Dialog Axiata, took home Rs. 30,000 and Rs. 20,000 respectively.

Leapset, the software product development company hailing from Silicon Valley California were co-sponsors of the event. Mani Kulasooriya, CEO of Leapset, delivered a knowledge sharing presentation at the event and referred to Leapset as a disruptive company, because of their initiatives in disruptive innovation.

“Most people are only interested in what you are doing; some others may go further and ask you how you are doing it,” said Mr. Kulasooriya. “But those who hail from disruptive companies will always focus on the ‘why’ and ask why are you doing it? For example, Steve Jobs said he wanted to make the world simple and beautiful. At Leapset we believe that successful disruptive organizations are driven by purpose”

He also went on to say that people can be broadly defined into five different categories based on their willingness to adapt to new technology; innovators, early adopters, early majority, late majority, and laggards. According to Mr. Kulasooriya it is the innovators, comprised of only 2.5% of the overall population, who drive the changes that makes businesses evolve.

Leapset, who launched their development centre in Sri Lanka recently, market their solution in the USA. A product that is targeted at the retail sector, it completely revolutionizes the way that POS, credit-card payments and online purchasing takes place, by seamlessly combining them all into one platform.

SLASSCOM’s mission is to drive Sri Lanka’s national aspiration of becoming an international leader in the knowledge economy. The association supports IT and BPO companies in an effort to raise their combined revenue to US$ 1 billion in Sri Lanka and reach an employment target of over 100,000 by 2015.

More photos could be found here