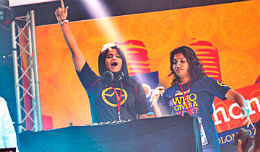 “The idea is to come up with something that you really want to do with your team and see if you can get something working. Along the way, we’ve got a whole bunch of random talks – and the objective there is not to put you to sleep, but to try to give you a different perspective about something. It’s to get you out of the box of just trying to code and to get you to look at something in a different way.”

That’s Dr Sanjiva Weerawarana, CEO of WSO2, declaring the day open. For the record, we’re at the WSO2 HQ (aka That Building With The Fishtank) in Kollupitiya. We’re here in the coolest hackathon ever held in Colombo complete with 48 hours of solid coding, no sleep, plenty of coffee courtesy of Coco Veranda. 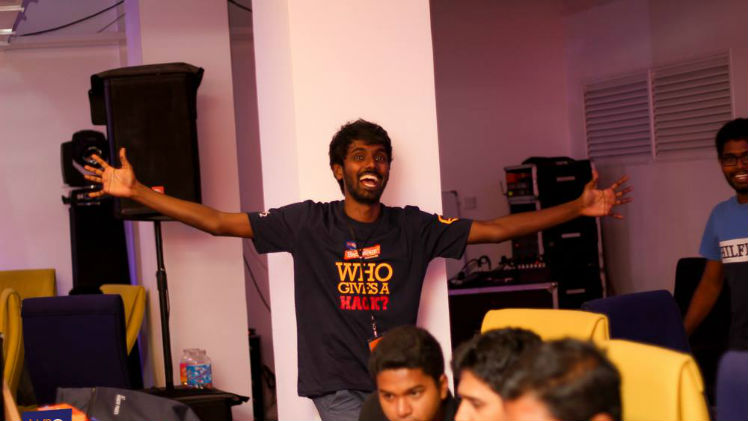 So let’s recap. We’re downstairs, on the ground floor. The first floor is buzzing with activity: hushed conversation, frenzied typing, the “tchah!” sound of annoyance when something goes wrong. Downstairs, things are a bit more festive. Developers on their break float in and out of the kitchen. The Coco Verenda crew, their coffee dispensed and done with, is playing foosball. We, fighting brain-death in the small hours of the night, are seated quite comfortably, streaming episodes of Naruto and Marvel’s Agents of Shield through our exclusive Hutch Live Team connections while a photo album is uploaded through the same.

In the past day and a half we’ve seen hasty coding, utterly random competitions to break up the monotony (for example, one where people had to escort a balloon from A to B with only a spray-can of water), pizza being devoured, more hasty coding, more pizza being devoured and a whole bunch of very sleepy coders bouncing off the walls. In between the pizza breaks, each team is struggling quite hard to meet milestones. 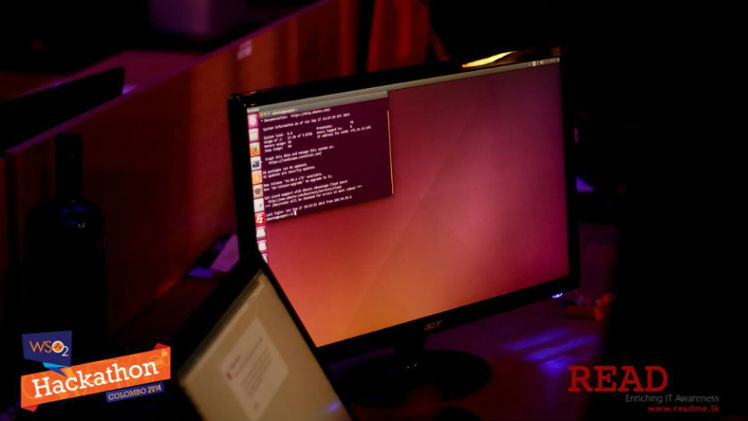 The struggle is very real.

We’ve also had a couple of inspiring speeches. For starters, there was Mano Sekaram on entrepreneurship:

“Before you become an entrepreneur – before you embark on this fantastic journey – you need to become a good leader.

The first thing is to think big – and to look at the whole issue, or the task that you have – from a very holistic approach. Let me tell you a story, There was a gentleman walking towards a village, and he found a quarry on the way. In the quarry were three people – stonecutters. He asked one of them to describe his job. The first guy said, “I work for the guy who pays me the most.” The second guy said, “I’m the best stonecutter in this village. I do this with passion.” He then walked up to the third guy, who said, “I’m building a temple.”

Most of us in the IT industry belong to this second category. We want to be the best programmer or the best CEO. We don’t see the temple that we’re building.”

“Now look at this guy. His name is John Resig. He was not a leader – a CEO or a famous entrepreneur. But he made Jquery, and he changed the world. This is my point: you don’t need a title to be a leader. Managers can have titles: leader’s don’t need them. It’s how you act and what you think that makes you a leader.“ 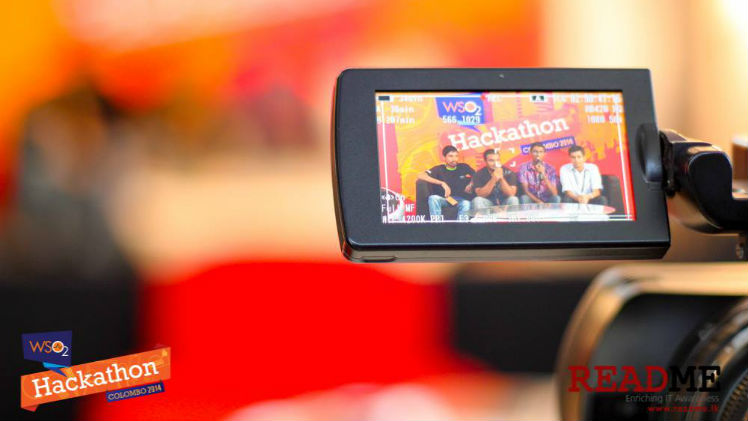 There was also Dulith Herath, the CEO of Kapruka, who embarked on the story of his childhood and how he built a billion-rupee enterprise from scratch.

Next up, we had a talk from a man representing a very interesting organization: the Lankan Angel Network. The man in question is Prajeeth Balasubramanium, and he spoke at length on how investment works for the person on the receiving end.

“Let me start by asking you the definition of an entrepreneur,” he begins. “And entrepreneur by my definition is someone who, rather than wokring as an employee, runs a small business and takes on all the risks.

My story is – I came back to Sri Lanka in 2002 to run my family business. I started investing in people. I didn’t know it was angel investment at the time; now I do. It was tough for people back then – nobody wanted to fund me to restructure my own company: I went to the bank and the bank wanted my house. So I did it with my own money and realized that I could help empower entrepreneurs. So, years down the line, I set up Blue Ocean Ventures.

We went and tied up with the Indian Angel Network. Together we formed a product called the Venture Engine. When we created this, for the first year in 2012, we realized that we needed to put together our own angel funding network in Sri Lanka; so we put together the Lankan Angel Network.

There’s certain things we’ve identified. The first thing that most people fear – three years ago, when I asked people to bring their plan and show it to me – they feared that I would take their plan away. That was genuine fear. However, in today’s circumstances it’s all about execution – somebody will copy you eventually : the key is being so far ahead that they can’t catch you.

It’s not an easy road. We look for certain things in people we invest in. We look for a willingness to take the risk. We look for a head for finances. We look for someone who understands that not every day is a piece of cake – it’s a rollercoaster ride. This is why you need a team that will take that ride with you. 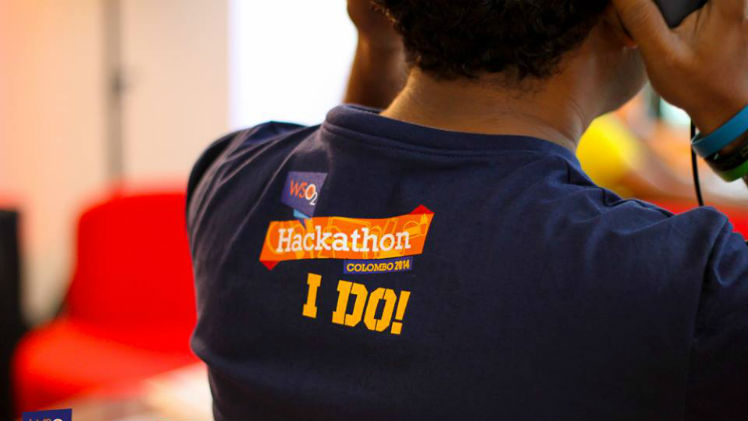 “It’s very important that you know who your partner in this is and who you’re going to bed with in this. Investment is like marraige: it’s give and take. You need to look for investors who will strengthen your weaknesses.”

Dr Sanjiva takes the stage next. He made a speech on copyrights, patents and licenses.

Okay, I’m going to start with this. You know what this is? It means “I Am Not A Lawyer,” he begins, plunging into the murky world of copyright. “If you own something, as a copyright owner, it’s your complete right to do with it as you wish. You can discriminate – you can give it to one person under certain terms and another person under different terms. That’s copyright.

Copyright is a really, really important thing to understand, because you can’t just take another person’s stuff. And by stuff, I don’t mean physical stuff -anything that they’ve made. A random friend writes down instructions on a piece of paper, and you make a copy of that paper – you’ve just violated copyright.”

After introducing Creative Commons to the audience, he then went into how devastatingly powerful software patents can be, citing examples from his own work. “Because large companies do this a lot, the best way to shut down a company has become to set them a thousand patents and say “you’re violating all of these”. And to analyze these thousand patents, the company being sued has to pay a lot of money in legal fees. If you look at a patent – any patent – you’ll see that they’re written in a way that takes months to understand. At this point most companies would ask to settle and say “Okay, how much do you want?”

It’s gotten to the point where this has become a perfectly viable business model. These companies are called patent trolls.

In fact, if everyone spent their time suing each other for patents, all the big companies would spend all of their money in the courts. So they have a thing called cross-licensing agreements, where they agree not to sue each other and instead go for smaller companies.”

“You really don’t need software patents at all, because if you write code, it’s already copyrighted. Patenting is not done to protect the investment – which was the original investment of patenting – but rather to prevent people from doing the same thing.” 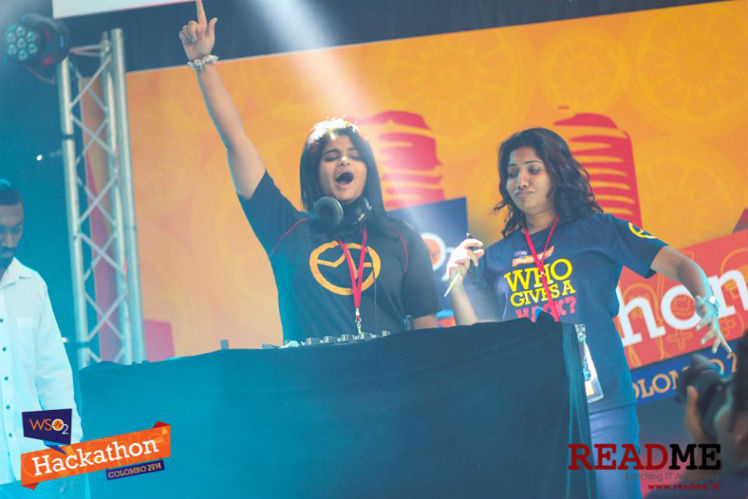 Last, but least, we saw Isura Silva of Sarvodya Fusion. His story was of the Tsunami and how, in the ten years since then, nothing’s really changed in terms of how people react to disasters.

Look at ourselves. Sri Lanka is selling software to John and Jane, but not to Malaka and Malka. My advice to you is to think about how you can change the lives around you. Facebook did not start with one billion people internationally – it started in a college sharing pictures.

I ask of you: how committed are you beyond these 48 hours of the hackathon? It’s easy to focus on something in a hackathon, but are you willing to take your idea forward beyond this?”