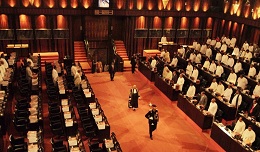 The provincial elections are just around the corner and the news that’s making headlines is beauty queens, super models, actresses and singers trying to get nominations to compete in the elections. But what are the representatives that got elected for the parliament actually doing? Sanath Jayasuriya is more concerned about cricket or his constituents? Ranjan Ramanayake is spending more time shooting movies or shooting questions at the government? Our busy schedules may not give us the time to go through the Hansard’s every day or watch the news and find out. The solution – say hello to Manthri.lk

Manthri.lk is a one of a kind website that was started by a company called Verité Research. Simply put, Manthri.lk analyses, summarizes and presents the work done by each Member of Parliament (MP) in a way that a common man can understand. The site launched on the 23rd of August 2013 has some pretty good information that is presented in a structured method so that it can be easily read and understood.

The main feature of the site as we see it is the ranking. When you load the site you are presented with a graphic of the most active and the least active MP’s in the parliament from the Colombo District. Clicking on the various parts of the Sri Lankan map will show you a similar list for the various districts of the island. Or if you’re bad in your geography, then you have the list view too of the districts. It’s interesting to see how the members of the opposition rank among the top 10 while those in the government, famous names too rank right at the bottom. 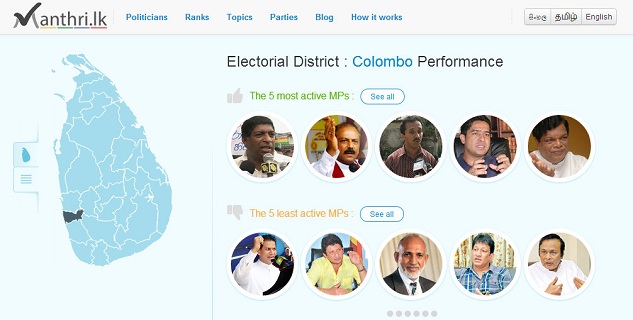 So how does all this work? Well the “How does it work” page on the site explains it a bit with the help of the “FAQ” section.

Basically, the guys who run the site go through all the Hansards (the official report of a parliament day. Contains all the speeches made by every MP and other parliamentary proceedings. One book printed for every day the parliament sits) and analyze the contents according to a sophisticated methodology they have formulated and then input these results into a computer system they have developed. The system then neatly presents the ratings for the ministers, what they have done, how active they have been, and what topics they’ve discussed etc.

Till date these folks have been doing a good job. As a person interested in politics, this is probably the only site I know of which offers a service of this kind in Sri Lanka. A careful look below the FAQ reveals that the analytics in the site so far is made up of data that was collected between May 2012 and April 2013. It’s almost a year old now, but the note promises “to be updated shortly” – the delay being the analysis done manually.

Another interesting thing that caught the eye was the official telephone numbers of the offices of these MP’s mentioned where available. This makes it convenient – more like encouraging to contact the “manthrithuma” directly (though you never know if they will answer or not). 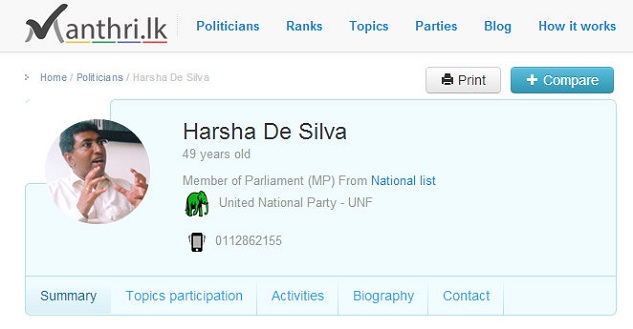 Recently, the site started posting all the political cartoon published in Sri Lankan newspapers on their blog. You can also read some good articles related to politics in Sri Lanka (not many though).

In conclusion, Manthri.lk is a great tool if maintained properly. For a first, these guys are doing a remarkable job. Something that should have been done long time ago but it’s never too late. It would be great if they could update the site with current data and then keep it going live so more people would start visiting. Hope that will happen soon.

If that’s not enough did I mention that its Tri-Lingual too? Read the contents in your preferred language of Sinhala, Tamil or English. Visit www.manthri.lk