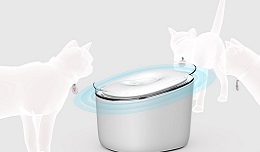 We all know a few cat people. Those who’s life seems to revolve around cats. Although in certain scenarios, the cat tends to revolve around them, presumably in an attempt to get fed or scratched behind the ears. Well, this is a small story about a non-cat person. In fact, this person has around 15 years of experience in developing robots and also holds more than 20 patents. Dr. Wu Li-Wei is an accomplished engineer who has designed an inventive new gadget. Its no robot, but rather it’s a water fountain for cats. Called Pura, it has an accompanying app that makes sure that your cat drinks enough water.

According to Wu, ye regular cat doesn’t really feel thirsty the way humans do. Akin to the ancestral desert cats, house cats tend to get water from the prey they kill or in this case the food we feed them. The problem with this is that the food given doesn’t necessarily contain the required levels of water. This can lead urinary disorders and ultimately kidney failure, which is the most common cause of illness and death in cats.

Even though the market is flooded (pun intended) with water fountains they are difficult to maintain and look like what the cat dragged in (again, pun intended). To get over this, Wu and his Taiwanese startup are applying some Apple-esque design principles to make Pura a more appealing object to both cats and humans.

With regard to how it works, Pura is designed to let them drink flowing water without getting their whiskers wet, due to the gentle slope that the water goes down. For humans on the other hand, a transparent tub holds the water and carbon filter which clicks into the base easily using two metal contact points so that it receives power, not splash water all over the floor, and also provides analytical data such on how much water the cat is taking in. If you have more than one cat, you can get them to wear a Pura collar tag so the fountain can identify which cat is drinking water. According to tests carried out, cats tend to drink 30% more from Pura than they would a regular cat water fountains.

Wu and the Noacare team have already got a Pura prototype ready complete with mobile app as well. Once launched somewhere in April next year, the app will provide metrics akin to Fitbit and also even give owners alerts if a cat isn’t drinking enough.

Currently Wu and the Noacare team are seeking to raise US$100,000 from the Indiegogo campaign for Pura, and thus far, they’ve managed to gather up US$30,000 with 36 days remaining. The cheapest early bird offer which is US$99 is sold out, thus the cheapest you can now get a Pura for your cat is US$129 which also includes two collar tags. The regular retail price will be about US$180.