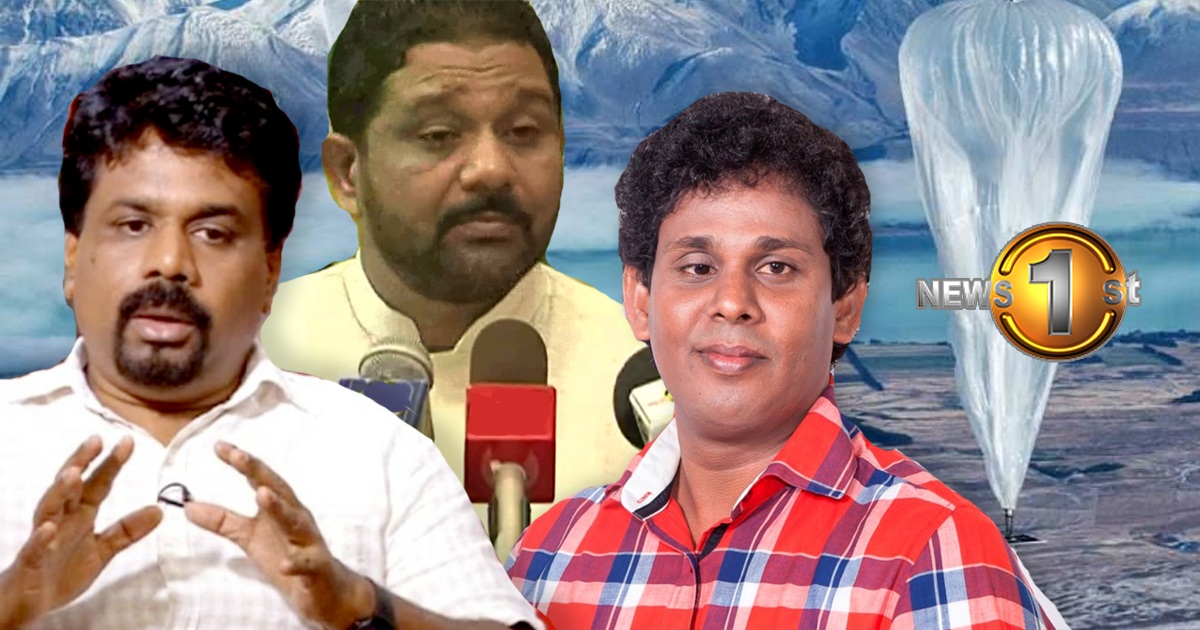 If you have been keeping an eye on the news lately, you would have noticed that the term “Google Loon” has popped up a few times. To be honest, a few times is an understatement. It popped up faster than Mushrooms in spring. The reason: Maharaja NewsFirst. They’ve taken it upon themselves to highlight each and every aspect of the project. While this is all well and good, they have also taken it upon themselves to publish news content of questionable legitimacy and rather stupid claims while doing so.

As we have been closely following this melodrama, we took it upon ourselves to go through all the facts stated by Newsfirst and their claims and see for ourselves what is true, and what is downright absurd.

Who handles Google Loon? Where the saga with NewsFirst began.

This was when the saga began. The video was published on the 16th of February 2017.

Overall this video deals with the explanation of how Google would use Rama to implement Project Loon. Minister Harin explains things in a logical manner especially about the confusion with regard to the 700MHz spectrum. However, we would like to point out that the video above published by Newsfirst is a shortened version of the press conference missing all the vital parts. We know this as we too were present at this press conference. The same press conference where a reporter from NewsFirst asked the facepalm-worthy question, “Can Rama implement Project Loon without Google?”

Project Loon: The MOU, its legitimacy and ethics questioned

On the 19th of February 2017, Newsfirst published another video showing views of MP Anura Kumara Dissanayake, Leader of the People’s Liberation Front.

So according to the MP, Rama is out to steal and/or purchase our spectrum and then sell it to those who want it. He also states that that Rama wants to steal our national property. Leaving aside the fact that the Spectrum is owned by the Government, one cannot simply waltz into the the TRCSL and say that they are buying our spectrum.

So government is the owner of the spectrum. As such, it has the power to revoke the license if it’s violated. Rama is neither a TV, Radio or Mobile service provider. It is merely a facilitator to act between Google and the Government of Sri Lanka. It won’t own spectrum either. The only need for spectrum is so that a test can be conducted. If Rama does need spectrum, this would be after a commercial agreement is signed. Even then, it must go through the auction process of the TRCSL to obtain spectrum like everyone else.

Our response to the second individual:

By and large, this individual seems to make a bit more sense. As for how Rama received the opportunity, with Chamath Palihapitiya’s background as a Sri Lankan born Venture Capitalist in Silicon Valley. Chamath acted as a middleman for talks between Google, the Government of Sri Lanka and ICTA Essentially, Rama would act as a neutral intermediary that allows Telecommunication Providers to access the Loon balloons and provides the software to handle billing and other services related to providing internet access with the Loon balloons. This means you will still pay the telcos for your data but the telcos will have to pay a fee to Rama.

Had a local telecommunication provider (the only one being Lanka Bell) offered their services or stepped forward, then they would have likely been given the opportunity. Then again, the likeliness of a local Telecom coming forward is rather rare. The main reason being that it’s not economically feasible for local telecom operators to build telecom towers and relevant infrastructure to.

The role of Rama was explained at a press conference in April 2016. It was clear that the reason Rama got this opportunity was because they gave a low cost option to cover Sri Lanka. This option didn’t cost the government a cent. At the same time, it also helped the telecom providers themselves expand their services. So in theory if Loon worked, everybody would have won.

The Voice Against Corruption alleges fraud

This video was posted on the 20th of February 2017. This again was based on the Press conference that Minister Harin was a part of.

Once more, we see Newsfirst blindly rushing forward to interview people who have minimal technical background and actually know little to nothing about Project Loon.  In reality, Chamath met with President Maithripala Sirisena on the 31st of January 2015 where Chamath made his proposal to provide affordable internet to Sri Lanka. Present at the meeting was Dr. Harsha de Silva as well. On the 15th of June 2015 a proposal termed ‘Project Rama’ was formally handed over to ICTA.

Following this, on the 26th of June 2015, Rama was registered as a corporation. On the 28th of July 2015, it was announced that Sri Lanka had been chosen to be the very first country to have full internet coverage courtesy of the Google Loon project. Chamath Palihapitiya would be the ultimate beneficiary of Rama. he would also invest through an SIA account as he is in the US. This is why two Sri Lankan citizens who Chamath trusted to carry out the procedures are the directors of Rama.

Moving on, the ITU has neither revoked or given Sri Lanka permission to facilitate the tests for Google Loon. Rather, they recommended that Sri Lanka not allocate the spectrum to facilitate the Google Loon tests as the spectrum requested by Google was already in use by other parties such as Mobile operators and TV/Radio broadcasters (the 700MHz spectrum). Furthermore, the 5.8GHz spectrum which was also denied is used by industrial and medical applications. If Loon were to be in operation, those appliances too would be disrupted. The reason Google wanted to carry out Loon on the 700MHz wavelength was because it was an experiment to see if Project Loon was commercially viable.

If we take an example of Project Loon in another country,New Zealand successfully completed a test pilot of Project Loon using 2.4GHZ wavelength as it is an unlicenced wavelength thereby usable by any party. As we have stated and restated, there was no commercial agreement to use this spectrum. It was just for testing purposes.

Rama was only the facilitator to bring Project Loon to Sri Lanka. In fact, Minister Harin Fernando himself told us personally that if another local company comes forward with a similar project, then the government would be ready to work with them. As for the resignation of Muhunthan Canagey, we don’t see any logical reason to this. At most if not all of the fraudulent claims against Muhunthan Canagey have in fact been created by Newsfirst in an attempt to besmirch the name of the ICTA CEO by means of this smear campaign.

Maharaja Newsfirst’s most recent video shows what Newsfirst calls “The Truth” but in essence is just more false claims.

Basically this is Newsfirst attempting to discredit Rama and Chamath again. The legitimacy of the establishment of Rama is again pulled into question. Though according to Newsfirst, Chamath met the President almost a year later. In reality, Chamath visited Sri Lanka twice. The first time was in January 2015 and the second time was in April 2016 Newsfirst, unfortunately decided to only report on the second coming of Chamath, once again showing off their level of research.

With regard to the balloon that crashed, On 17 February 2016, a Loon balloon crashed in the tea-growing region of Gampola, Sri Lanka while carrying out tests. In reality, the balloon crash was controlled and scheduled. In a letter from Google itself, it was confirmed that the landing was planned and controlled.

The video further takes content from our original video and attempts to misinform the public. This is done by taking segments from the video and playing them out of context. Once again, NewsFirst twisted the facts and attempted to make false accusations with regard to the 700MHz spectrum. The video ends with some lines of text stating that Newsfirst will “continue to report without fear or favor when we find evidence of a violation of public trust.” Newsfirst cut out the parts of our video which states that no commercial agreement was signed.

Which brings us to today

Today, the 6th of March saw more developments. We learned that Newsfirst and Muhunthan Canagey have been in contact with each other. Muhunthan stated that he gave Newsfirst the opportunity to come to his office to interview him. But Newsfirst declined stating that Muhunthan would either have to come to their office or answer questions via a phone call.

Newsfirst then goes on to comment stating that they have no obligation to come to Muhunthan’s office to carry out the interview. What we ask is, If they are a media organization, shouldn’t they indeed have an obligation to cover the story thoroughly? Especially since they have produced countless other videos on this topic?

It’s not like Newsfirst lacks the resources or the time to interview people especially with a topic that they themselves made popular and controversial over the past few weeks. If they can go out of their way to do more intense interviews with politicians, we really don’t see why they couldn’t have interviewed Muhunthan Canagey.

Let us also not forget that Newsfirst used our video in their news segment without giving us due credit. Apart from it being plagiarism, it also showcases their questionable skills in video editing. For example, where the video published by us is 20 minutes in duration, Newsfirst strips it down to a mere 7 minute clip and places it out of context leaving out the crucial parts.

Additionally, the appointment of Muhunthan Canagey as CEO of ICTA has also been pulled into question. According to Newsfirst, the President has only appointed Muhunthan as a Director and not the CEO. However, we would like to point out that the President merely approves the Directors who are appointed by the Treasury, which is the Ministry of Finance. This is because ICTA is a state owned enterprise. It is the decision of the Board of Directors to decide, who amongst them will serve as the CEO. As such, even if the President appointed Muhunthan Canagey only as a Director, it is not unlawful for him to serve as the CEO.

We report, you decide.

For a news reporting agency whose sole dedication is apparently to deliver the truth, Newsfirst certainly has gone out of their way to screw up the facts and twist them to suit their own deeds. Couple that with giving prominence to people who have no knowledge regarding a particular subject matter and you find yourself cooking up a recipe for disaster.

Before you go around making false accusations and blatantly ripping off content made by others, do yourselves (and us as well) a favor and learn the ethics of good journalism. As for Newsfirst continuing to report without fear or favor when there is evidence of a violation of public trust, by all means do go ahead. But do us all a favor, and leave the Tech to us.