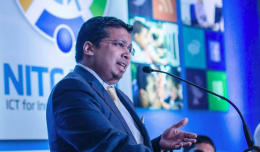 “Technology in itself is neutral. Science is neutral. But historically, technology has been used by those in power to remain in power. The point I’m making is, ICT has its good sides and bad sides.

We have this rhetoric from the World Bank saying that if you invest in broadband, your GDP will go up. I hope you don’t believe it. We assume it contributes to development: that doesn’t mean it’s true. Development can mean many things to many people – growth, equality, democracy.

By and large, governments – and people – believe that good governance and democray will create economic growth and bring people out of poverty. We have a very symbolic view of IT – we believe that having the latest smartphone or having a % GDP means growth.

But does technology make us happier? Take emails, the worst thing to happen to human productivity. Take, for example, this advertisement, which shows an Acer Aspire computer helping Megan Fox talk to a dolphin.

I’m sorry I’m not Megan Fox, but you see this all over – technology making people happier. But if we’re going to see fair development, we’re going to see development not only as improving the economy, or freedom, but at reducing inequalities. That is why this conference is about inclusiveness. Has ICT actually helped the poorest people in the world? I would say, no. Not all is well here. Differences in ICT – broadband affordability, mobile penetration – are hugely disparate between rich countries and poor countries.

This is why we need to look at alternate development. It’s not about smartphones or getting better-written emails. We need to look at reducing inequalities. I’m fed up of being at international conferences where people say “We will connect the next billion.” That just means the bottom billion just gets further away. We need to help the poorest people.

If we can solve it for them, we can solve it for everybody! We have to focus on the poor rather than the rich. People with disabilities. Youth out school. The private sector will not be the vehicle through which social justice is delivered. It has to be the Commonwealth.