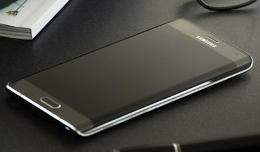 The world tends to stand up and take notice whenever Samsung does something. This time, they’ve rushed out ahead of the anticipated “big iPhone” – and they’ve sent to battle not one, but four products – two smartphones, a cool new smartwatch AND a Virtual Reality headset straight out of the Occulus labs. Shots fired!

So, in order of curiosity:

1) The Galaxy Note Edge and the Note 4

Yes, we’ve seen big phones before. But what about a big phone with two screens – one a massive 1440p display (2560 x 1440, higher than most of our desktop monitors) and the other a curved screen along the side? Because that’s exactly what the Galaxy Note Edge is. It’s fundamentally a Note 4 – which we’ll be looking at soon – with a unique, curved strip of display along the side that acts as an entirely new notifications bar or icon tray. Here’s a very cool hands-on that’ll give you some idea of what it’s like:

And then we have the Note 4, which is your standard Galaxy Note – inasmuch as you can called a 5.7-inch phablet with a 1440p screen “normal”. We’re looking at a 2.7 Ghz quad-core processor and 3GB of RAM.  The cameras have been upgraded – the back snapper is now a 16-megapixel shooter with optic image stabilization.

Design-wise, the Note 4 makes an interesting change: according to hands-on reviewers, it’s perhaps the first Samsung smartphone to not feel like plastic.

This is due to a textured leather finish on the back, minus the stitching of the Note 3, and a slim metal band with chamfered edges around the device – small changes that make the device a whole lot more premium. Even the pen looks better.

They’ve also sent in a 3,220 mAh battery and swapped out the large USB 3.0 port for a more conventional MicroUSB 2.0 charging port. All in all, it looks like an incremental upgrade to the Note 3, just like Sony’s Xperia Z3 improves on the Z2 – a successful formula done right.

Now here’s where things get really interesting. The Gear VR, the result of a partnership with Occulus, is a VR headset powered by the Note 4 – and only the Note 4. It consists of a housing for the Note 4 and a pair of lenses in front of the eyes to provide the 3D effect. Snap in the Note 4, and viola! Instant Occulus.

Except unlike the Occulus, it’s wireless (because the phone, which does all the work, is inside the device) and you can walk around and bump into things.

It looks like a very fun accessory – a lot like Google’s Cardboard, except much better done. The New York times doesn’t seem to like it, calling it “heavy, slightly uncomfortable and makes its wearer feel extremely self-conscious” – but it’s a 3D headset, not a pair of Gunnar lenses  We see John Carmack going completely nerdcore over this one:

We didn’t quite like the Samsung Galaxy Gear when it debuted in Sri Lanka – it looked too clunky to operate and was a bit too expensive for out tastes. But it looks like experimentation has led Samsung to this: the Gear S.

Looks-wise, it resembles a Gear Fit and strikes a comfortable balance between digital and classy. There’s a 2-inch curved OLED screen, it’s waterproof AND has swappable bands. Inside, it runs Tizen on a 1.0 Ghz processor. That’s right – it’s not Android. Apparently, it’s also capable of pretty all the basics you phone can do – it actually can work without your smartphone – it’s truly independent – and it even packs a heartrate sensor, like a proper computer on a wrist. It’s even got its own Gear Store with (according to Samsung) a thousand apps in it.

If there’s a difference here from Sony’s undeniably cool but rather miscellaneous release (also today), it’s that Samsung seems to have played all their cards right – and even innovated along the way. While the Galaxy Edge, Gear S and the Gear VR will need extensive development behind it, we can’t help but feel that Samsung’s gotten a head start this time.