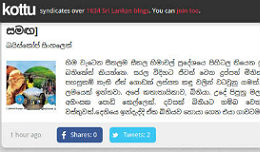 I was surprised. Days and months always crawl by, but the years seem to fall swiftly, like a row of dominoes stretching from the hospital bed to the coffin. Naturally, I favourited the tweet and waited for more celebratory tweets to pour in.

They didn’t. Kottu, it seemed, had been forgotten. If you have some time on your hands, let’s spend a few hundred words remembering it.

Picture 2004. Not everyone had Internet, and those that did had terrible Internet courtesy of our Lord and Savior, Sri Lanka Telecom. Social networking had not really caught on. Zuckerberg was still working the Harvard block; Myspace and hi5 were gaining an audience, but mostly among excited teenage girls logging in through the school lab to message each other.

This was the Sri Lankan Age of the Blog. What other countries had been doing for years took some time to hit Sri Lankan shores, but when it did, everyone who could cobble a decent essay together had a blog. People wrote about disaster relief, social issues, the war, politics, food, poverty, life, culture, music – it was as if someone just taken a whole bunch of Sri Lankan thoughts, especially from Colombo, and thrown them online. Of course, most of them weren’t particularly mature. That’s perfectly alright: you’re allowed to be an idiot online.

And then in 2005, two bloggers – Indi Samarajiva (indi.ca, YAMU) and Mahangu Weeransinghe (who dropped off the grid ages ago) came and set up a site called Kottu.org. By itself, if wasn’t a particularly innovative thing – it was a blog aggregator, an online feed reader of a type done and dusted many times in the world at large. But it was exactly what the fragmented Sri Lankan blogosphere needed. People started sending in their RSS feeds.

Kottu soon basically became a front page for so many blogs that people actually started to sit up and pay attention – and as with anything online, if you get enough people involved you end up with a bona fide community. People in Sri Lanka read Kottu, showed off their photography and budding web skills, met each other for random meetups, argued among themselves. People outside of Sri Lanka read Kottu to find out what people in Sri Lanka were talking about. Indi.ca’s vast and extended flame wars added to the spice. Salmonella, Scourge, Electra, Jack Point – all the makings of a very eccentric, very fun, sometimes hilarious one-percenter community.

The site itself evolved, moving from Gregarious to WordPress. Janith Leanage (of Yamu) also became involved. Names came up on the front pages and went away.

I love Kottu. It’s part of my day to day life, at least to check Kottu once every two three hours. So, I don’t like any of the users or contributors abusing it. – Landlikenoother, circa 2007

Actually, that’s a lie. Facebook’s popularization here coincided with many bloggers simply dropping off the map, and statuses, groups and such really did spell the death knell for many a blog. But the real issue was threefold:

a) Facebook. To quote a friend, why write 750 words when you can write twenty words, add a photo, get a dozen likes before you refresh the page and a couple more people commenting? Blogs never had as much engagement as a social network. However, blogs never died, and many of those that survived the purging actually went on to become brands in their own right – take, for example, the many popular travel blogs out there. The bigger problem was:

b) The bulk of Kottu. Kottu had a community, and it catered to certain demographics. The attraction there was that you could load kottu.org and expect something funny, something intelligent, something stupid, and all of it readable. That standard lasted just a few months under a barrage of Sinhala movie reviews, software tutorials and sports content rewritten from local newspapers. It was one of the rare instances when localizing just didn’t work well – if there was a language filter, perhaps it could have worked, but with everything in one big jumble, there was just no incentive to read it anymore.

It still has its uses. It is the definitive index of Sri Lankan blogs, and if you dig through the rubble you find some real gems – old blogs being dusted off briefly, or new writers with passion and flair. Still, it’s nowhere what it was before. Kottu now lives mostly as a list.

So here’s to ten years of Kottu.