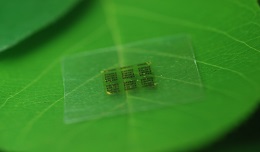 Well now this takes the phrase “a chip off the old block” to a new level. Apparently computer chips that are wood-based perform just about on par with what ye regular chips used for wireless communication would.

Regular chips used for electronic components such as transistors are made on the surface of a sturdy wafer made up of silicon, known for its’ semiconducting properties.

Now, Researchers at the University of Wisconsin, led by Zhenqiang (Jack) Ma who is a professor of electrical and computer engineering have developed electronic components in a similar fashion but used a rubber stamp to raise them off the wafer and place them on a surface made up of nanocellulose. This effectively reduced the amount of semiconducting material used by a factor of up to 5,000, without a hit on performance.

In demonstrations, the team displayed that nanocellulose can be used as the support layer for radio frequency circuits comparable to those used in smartphones and tablets. These can also be broken down or dissolved by ye common fungus.

A major part of the material that is used for manufacturing is used mainly for the support layer whilst the actual electronic components are only a miniscule fraction. This is both wasteful and can lead to pollution when the device is disposed of.

Even though these chips are ready for commercialization, Ma speculates that it will take an increase in environmental pressure or even a price hike in materials like gallium in order for the mainstream electronics industry to shift their views and opt for this technique.