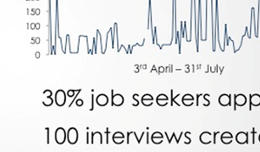 ‘I have received 50 SMS messages. Each SMS gives me a new hope every day! I am sure now I have a bigger chance to have a better job!’ – Yogeswaran was already employed in a local NGO. But he wants to find a better job with higher payment and closer to his home.

Yogeswaran is one of 1050 job seekers registered to the JobHub, the ICT based job service explicitly serving a unique population of young unemployed (& under-employed) in Northern Province of Sri Lanka. Unique because these youth were the victims of a 30 year long ethnic conflict; they were born in a war environment, grew through refugee camps and battle grounds, some of them were ex-combatants still going through rehabilitation programmes. Under the post-war reconstruction efforts, since 2009, they are being given vocational skills and educational opportunities by the state and the development actors such as CARE International.

‘None of them like commuting to distant places for job opportunities, leaving their families behind’. Career Guidance Officer (S. Veerasuthakaran) at Zonal Education Office (Kilinochchi), explained about insecurity and mental scars of the ethnic conflict that are still occupied in their small minds.

Nevertheless, everybody has a mobile phone. Apart from communication, for many it is a means of entertainment; listening to music, learning about news and gossip. Given they are very basic hand sets, SMS is the best technology to work with. Though weak mobile signals fade away when they reach remote villages, some times 20 km away from the town, sooner they reach a signal zone, phone reconnects, message lands in the phone.

Using ‘Frontline SMS‘ as the platform, Sarvodaya-Fusion has launched the project as a pilot trial only 4 months ago (April, 2014) with the support of CARE International Sri Lanka. Since then project has gained an unexpected traction. Over 7000 text messages generated 100 new interviews to the local youth. ‘I have applied to the job when I saw the SMS text in my friends phone, and it is amazing that now I am employed’. Kadiragamar Kaleimagan is one of the 20 employed youth who have received SMS messages just from their friends in the local village. (See the trends in the illustration). 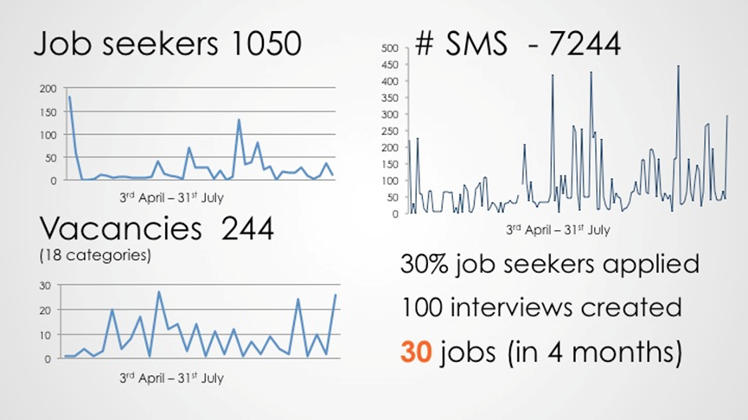 ‘If I post the vacancy in a local newspaper, I will get about 100 applications. Have to wait about 2 – 3 weeks, and then short listing, calling and too much trouble to find the right individual. But with JobHub I got four applicants within days after posting the job and I have recruited one. It is very convenient for me’ – Thamil was the founder and manager of the leading guest house (Solaivanam) in the area. Many SME owners like Thamil has contributed to the 240 job vacancies posted over last three months. In a battered area which is just emerging from rubble to experience early life of modern market-economics, 240 jobs is a big number.

JobHub is implemented by Sarvodaya-Fusion with the sponsorship of CARE International in Sri Lanka.

This is a press release. Opinions expressed here are neither provided nor endorsed by README.