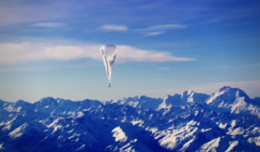 Last July, ICTA made the surprise announcement that Google’s Project Loon would be coming to Sri Lanka. It’s an ambitious project to say the least, with its aim of delivering internet access to every corner of Sri Lanka using high altitude balloons. Yet despite the massive scale of the project, it was announced that Project Loon would be operational in Sri Lanka by 2016, one short year from the announcement. It sounded crazy back then, sceptics said it couldn’t be done. However, today those skeptics might be taking back their words.

Google equipments to commence ground test have arrived in #lka. Arrangements being made for cargo clearance @icta_srilanka @fernandoharin

The necessary equipment to commence tests of Project Loon has arrived in Sri Lanka.

So how are these tests going to work? The answers to that question were revealed at a press conference held yesterday that was organized by the Ministry of Telecommunication & Digital Infrastructure. Speaking at the conference, Hon. Minister Harin Fernando – Minister of Telecommunication & Digital Infrastructure said that the testing of Project Loon will begin later this month, with the Ratmalana Air Force base being used for landing tests.

The Minister also assured us that not a cent of public money of was being used in this project as we learned last year. The government’s contribution to this project would be the required spectrum and will retain all rights to it as it will be given by the TRCSL. In return for providing the spectrum, the government will receive a 25% stake in a project company.

Furthermore, it was also announced that Sri Lanka’s telcos were all offered a 10% stake in this project company. Since Project Loon only expands the internet coverage of existing telcos, this is an important development. According to the Hon. Minister, talks were held with all telecommunications providers in the country and all but one supported Project Loon coming to Sri Lanka.

The initial announcement stated that testing for Project would begin somewhere in December 2015. With the tests commencing now, we’ve seen the project take a 2-month delay. As such, we might miss the original goal of Project Loon covering the island by March 2016. However, the equipment is here in Sri Lanka and plans have been drafted to commence tests soon. This is still a promising start. Despite the delay, it’s starting to look like we actually will have balloon internet by the end of the year.