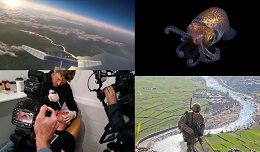 Science for the Masses, a biohacker group in California have announced that they’ve successfully given night vision feature to a human being via a liquid solution injected directly into the eyeball. Before you say anything, read this first.

The solution includes a substance called Chlorin e6 (Ce6) which can be found in some deep-sea fish. The unique attribute of this is that it possesses light-amplifying properties and has also been used for certain cancer treatments.

The researchers used a sort of pipette or turkey baster to inject the Ce6 solution into the eyeball. More specifically, the conjunctival sacs of one Gabriel Licina who is their test subject and also a part of their group.

Within an hour, the effect kicked in and provided Licina with night vision or rather, low-light vision which is out to a range of about 50 meters. To see the potency of the experiment, a series of tests were carried out. Basically, Licina was able to spot and recognize objects, symbols and people in a darkened field that others couldn’t see.

The team plans on following up with more advanced experiments and hope to produce some reports based on the degree of light amplification achieved.

I guess you could say, we should have seen that one coming.

Researchers at the University of California at Irvine (UCI) have decided to take a look at squid skin to develop camouflage patterns that cannot be detected by infrared cameras.

The skin of a squid possess cells known as iridocytes. These contain layers which are made up of a protein called reflectin. Researchers successfully coated a hard substrate with the protein via coaxing bacteria to produce reflectin.

A researcher at UCI, Alon Gorodetsky, Ph.D. stated that soldiers usually wear the well-known green and brown camouflage patterned uniform to blend into foliage during the day. But at night, with low light, they’re still vulnerable to infrared detection.

Gorodetsky has fabricated reflectin films on conformable polymer substrates, essentially sticky tape. This tape can be used on a range of surfaces including cloth uniforms, and its appearance under an infrared camera can be changed by stretching, a mechanical trigger that might be used in military operations.

So you take out this protein-coated tape, use it quickly to make an appropriate camouflage pattern on the fly, then you take it off and throw it away.

As you all know, YouTube introduced the 60FPS video playback a few months ago. Now YouTube has taken a step further by introducing 60FPS video on YouTube, at 4K. Initially spotted by tech mogul TechCrunch, YouTube’s 60FPS 4K video playlist consists of 6 videos. For the videos to work in full resolution, the devices playing them must be capable of displaying ultra HD resolution. Apart from having sharper video, movement is a lot smoother when compared to common frame rates of 24fps and 30fps

Currently, though there are a number of 4K displays in the market, there’s not enough content to really make them stand out. Even internet access and connectivity is an issue. Imagine streaming 4K content here in Sri Lanka (Sayonara bandwidth). But for those who have already invested in it, it is indeed encouraging to know that a service such as YouTube now has content to make full use of your investment.

Check out this link for some 60FPS 4K goodness.

DARPA is working on an alternative to GPS

GPS or Global Positioning System technology has been in use for quite a number of years and has been used by different sections of the society like military, civil, and commercial sectors. This, however, has its limitations and weaknesses. To overcome this, DARPA is working on an alternative.

Called ASPN (All Source Positioning and Navigation), the new technology will help soldiers in harsh conditions where GPS access gets obstructed.

In order for this to be viable, DARPA is also working on self-calibrating gyroscopes, accelerometers, high-precision clocks and navigation instruments that work without wireless signals or other external sources.

They are also looking at what they call “signals of opportunity “which could pick up signals from television, radio, cell towers, satellites, and even lightning. These will be used to assist the receiver in navigation and real-time positioning. The device will also be small in size to make sure it’s easy to carry around and the sensors used will be cut down in size to reduce power consumption.

While all this sounds promising, the actual deliverable currently under development and will take a few years to become a reality.

The F8 Developer Conference held in San Francisco revealed a number of things related to Facebook. Here’s one more; they are building drones to help accomplish its Internet.org project.

Codenamed Aquila, the UAV will be V-shaped and have a wingspan of a Boeing 767 jet airliner, but thanks to the material used, will only weigh as much as a compact car.

Using solar power to operate, the drones will stay in the air for around 3 months and push internet access to 60,000 and 90,000 feet via lasers. They will communicate with each other so that they cover the maximum area on the earth.

Facebook’s drone initiatives are powered by its buyout of Ascenta, a drone maker in 2014, but it needs external support to build its fleet of drones. They are therefore seeking partners to fund its Aquila project to take off, and in turn the company will offer the data and technology to the supporters.