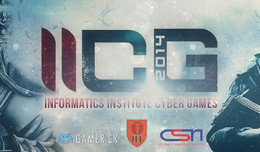 In the latest of a series of gaming tournaments, the e-Sports society of IIT, in collaboration with the Carlton Sports Network, held the very first IICG on the 15th and 16th of March, covering five major titles commonly played competitively in Sri Lanka – Call of Duty 4, DOTA 2, FIFA 11 Mortal Kombat 9 and Need for Speed: Most Wanted.  IICG ended up less of an open tournament than a giant battle arena for the virtual rivalries of three of the largest gaming clans in Sri Lanka – namely Tech Morph, Phoenix Gaming and Xiphos eSports, the reincarnated clan born out of Death Company.

FIFA 11 (Winner: PnX | PaLLu / Runner-up: PnX | Zenith)
FIFA 11, too, ended in an inter-clan matchup, probably due to the large number of Phoenix Gaming members who focused on this title.  This time, FIFA took a slight twist: crowd favorites CB and SHARPSHOOT3R, both from Pheonix Gaming, were knocked from their positions by Pallu and Zenith, who clinched the first and second positions.

DOTA 2 (Winner: TM | Death Sentence / Runner-up: PnX  Thè Kadè)
Dota is a sport that’s seen a huge amount of rivalry in times both present and past. Death Sentence from Tech Morph went up against Thè Kadè from Phoenix Gaming in a battle of eternal favorites. Both teams have a long history of fierce rivalry behind them:  IICG saw Death Sentence secure their title in a best-of-3 match that saw some fierce macro skills at work.

Call of Duty 4 (Winner: x3 | iPwn / Runner-up: TM | Phat)
Call of Duty 4 routinely attracts the largest crowd in any tournament. This matchup saw a three-way battle between the strongest clans in the Call of Duty battlescape – Maximum Gamers, Tech Morph and Xiphos Gaming. This was literally Xipho’s debut match under their new X3 tag. The 52-slot draw staggered on for two days, with Maximum being winnowed out in the semi-finals; TM | Phat and X3 | iPwn, after a lengthy battle involving a tie-breaker, took their places as runner-up and winners respectively.

Concluding the event with many table-flipping moments, all who came to IICG had only one comment to say – what a great event! With new and old gamers capturing titles or regaining their old dominance over the gaming hierarchy, we witnessed a true streak of professional eSports warfare. We’re certainly looking forward to watching these cyber-athletes defend their titles in the next tourney. Would the results be the same again? Only time can answer that – time and perhaps GamerFest ’14, which is scheduled to take place on the 22nd and 23rd of March. Until then, stay tuned – and expect the unexpected. (exclusive via www.gamer.lk)