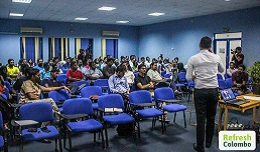 It was a warm Thursday evening. Now that you think about it, most of our event happen either warm evenings with the only variable being the day. However, this was not ye usual event. Yes, that term too is rather a cliché with us but do bear with us. This was Refresh Colombo’s January meetup.

Refresh Colombo is a community of web and technology enthusiasts/professionals who come together on a monthly basis to share ideas and meet like-minded individuals.

These events are open to the public and the community encourages those participating and interested to bring along a friend or two.

The first speaker for the day was a duo; Mahen Rathnayake and Mudith Uswatta, the founders of the popular app “Katha”.

Mahen started off the session by explaining the concepts behind Katha and explained how the platform has been on the Google’s Play Store and The Apple Store for 9 days. On its third day, the app was ranked 173rd in the “Top Free” category and 14th in “Top Free Entertainment” and 80th in the “Communication” category in the Play store. He then expanded into his topic “From Zero To One”. Moreover, how to convert an idea to a product, valuing said ideas and finally developing that idea.

Mahen then recounts the story of Katha. We first met them as they took part in CMBHAck and then went on to Venture Engine finals. Five months down the line, what started off as a simple idea, has now developed into a fully-fledged product.

“Everyone has ideas, but how does one take an idea and turn it into a product?”

Mahen explained that in order to do this, one must identify potential customers, build a business model and of course repeat steps 1 and 2 till you get it monetized.

Putting a value to an idea is a two-step process step.

Another important part is to be aware of who you are hiring and make sure they complement your workforce. For example, if you’re hiring three people, make sure one of them is experienced and the other two are new. That way, the experienced one knows exactly what needs to be done and the two new recruits can share their creative input on how to perform tasks from a fresh approach. The end result? They are all up to date and they also have experience.

Mahen’s session came to a close and his partner Mudith took his place.

He explained how you should pick an idea and see if it matches the criteria of being a “Zero to One” idea. This is where if you are improving an existing idea it is 1N, but if it’s a never before seen fresh idea, then it’s a Zero to One idea.

“Don’t think about the money”

However, you can accept outside investment if

Mudith’s next key are was the Founding Team

Just be yourself Mudith said, and you will find people with similar interests. From there you can identify those who you can work with on similar projects.

Well for starters, it’s about personal growth. A startup is a great motivator if you know that you’re going to fail. This is the perfect example as you have no clue of what to do and you’re doing everything for the first time.

The session was followed by a brief Q&A

The next speaker was Anudi Nanayakkara. Her topic: Think it! Speak It!

Everyone attends Refresh events expecting that they will learn something. She talks about how important it is on how people perceive your ideas. Whilst communication is indeed key, the way you perceive your ideas and present them to an audience plays a bigger role than the idea itself.

You are the basic representative for your idea. When presenting, the target audience will only believe in the person stating the idea and not the idea itself. They will see the idea, but they will not exactly have faith in the idea itself.

Once you have presented your idea, the next step is to interact with customers or potential clients. Once that is done and you have your idea in place and have pushed it forward, the next hurdle is to inspire your employees. This, Anudi says, is easier said than done.

“It is important that when you are a leader, to continue being a leader. Regular communication is key”

Approachability is the next step. An employee may approach you with a crazy idea, but if you reproach it, you may be losing a very good idea just because it sounds “crazy”. Or “doesn’t fit in with your mindset”. Remember Leonardo Da Vinci’s Flying Machine? Similar concept.

Once all that is done, you must sell yourself. Yes, you end up being a brand yourself. By doing so, you build up self-confidence, and once people see that you are self-driven and hard-working, they will see that these are the things that will build up yourself, your brand and your idea and that you’re willing to pull through with it.

Before anything, listen to your audience. 90% of people in a room will want to know what you have to say, but that 10% may not want to. Don’t let that phase you. Just say what you need to say. Once you have an idea, put it forward, and don’t be afraid.

Anudi’s session was again followed by a brief Q&A where the audience seemed to have warmed up to her topic and engaged in a few well thought out questions.

The last speaker for the day was Sunesh Rodrigo.

Sunesh draws from his life experience where at the age of 15, he had no clue what he wanted to do and applied to MTV to be a journalist. As the years went on, he went on to be the youngest person in charge of news. At 27, he was bored out of his life. From that sprung “Vantage Consultancy”.  The first 6 months of his business was a virtual drought. There were no clients in sight. From there, Sunesh went back to his hometown, to which he jokingly refers to as the “place that Guantanamo Bay could fit in”, he took to his family’s farm and began the toiling and tiring work of maintaining the farm. It was there that he found his true calling.

‘Agriculture is a far more profitable business than anything before“

Agriculture as an industry faced with a multitude of problems. Pollution, negative comments about agriculture, political agendas, the list seems endless. Sunesh then delves into the depths of farming, throwing figures at the audience and explains at length about paddy and the process of making paddy so that we can buy the rice we buy at supermarkets.

“If anyone says Paddy is not a profitable venture, that’s bulls**t”

He then shifted into his goals where he wanted to inspire people to get back to agriculture. From here sprang the idea of starting a small bud plant nursery. As it turned out, Paddy, Pepper, and Pineapple were the most profitable produce with pepper being the most demanded hence being the number one spice used in the world. Sunesh’s idea called “FoodIGrow” would basically be to sell bud plants to those interested so that they too can start growing their own produce and thereby spawn an economy for the long forgotten are of agriculture. For a small price, Sunesh would actually deliver the plants to your doorstep and help you kick off your own farm. He has a number of good points to do so too. For example, you:

If you’re looking at the corporate side of it, then:

Sunesh’s session was met with a well-deserved round of applause and the crowd really seemed to love the idea and appreciate all the hard work that he had done. Sunesh, in turn, was proud of his achievements with FoodIGrow and was keen to show off some of the milestones that he and his company had gone through. Those interested in Sunesh’s venture can click here for more information

With the final Q&A session (which took a bit longer than the other sessions), it was time for Refresh Colombo’s January Meetup to come to and end. Adnaan Issadeen was back on stage to thank each and every speaker and also those who helped in organizing and finally, those present for their time and dedication to attend the event.

It was indeed a refreshing evening as we stepped out of the Royal College Union Skills Center.

Till next time folks.