The recent Presidential election spawned a singularly phenomenal amount of activity on Sri Lankan social media. While most of us bickered and clicked through various notifications on Facebook, it was Twitter, with its noisy and instantaneous nature, that emerged as the best way of tracking the ceaseless flow news, opinion, predictions and political gossip.

While Facebook seems to have quieted down post-election, the Twitterscape is very much alive, with tweeps pushing waves of content out into the world. Let’s have a look at the biggest players on this field.

The first step is to find a hashtag. #PresPollSL is the de facto hashtag for anything political right now, with everything from news channels to local political analysts to geographically displaced rappers in forum.

The second hashtag is #PressPollSL. No, it’s not the same: notice the slight difference – an extra s. This misspelled hashtag nevertheless saw frenzied activity, making it impossible to discount from the selection. The other popular hashtags – #lka, #srilanka and #my3 – are unusable due to noise and, in the case of the latter, inevitable political bias that make it miss out on content.

My next step is to download 18,000 tweets from each hashtag. 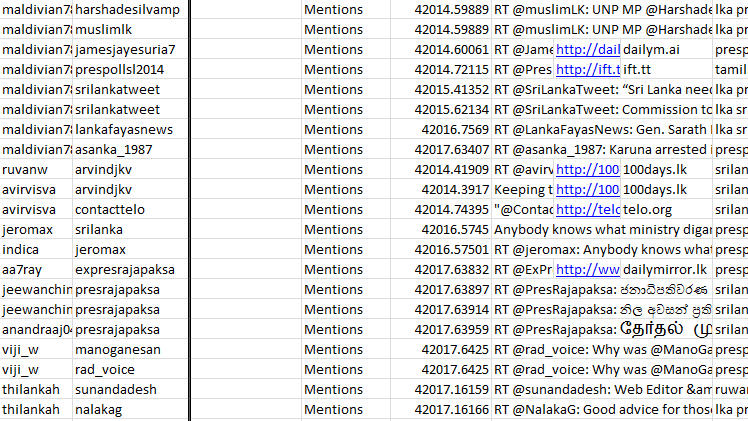 This sounds a lot harder than it actually is. The weapon of choice is NodeXL, which allows me to fetch tweets containing a given search term and cast them into an Excel sheet. This data has four key data points – the tweet, the name of the account doing the tweeting, and the type of action carried out therein – be it a mention or a tweet. The 18,000 number here is not an arbitrary selection: it is the maximum number of tweets that can be fetched at a time by NodeXL using the current Twitter API – NodeXL caps itself, though data fetches have brought back results in excess of 20,000 tweets.

This data is then saved as a GraphML file, which I process with Gephi, a popular data visualization software that, with the right setup, allows one to easily map out community structures and the connections therein. 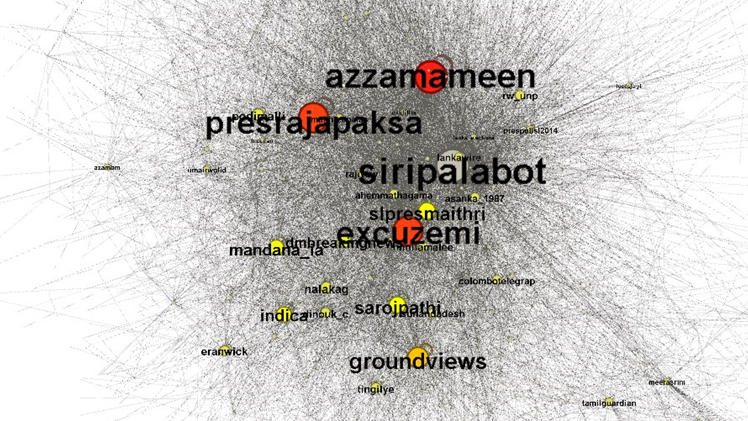 This is a highly visualized map of the flow of information along the #PresPollSL hashtag, dating from now to the 10th of January. Each twitter account is represented by a circle (node). The size of each node directly corresponds to the number of tweets it’s pushing out.

The red hue of a node corresponds directly to the amount of engagement it’s getting – replies, mentions, direct tweets.  There are literally thousands of Twitter accounts in this graph, but as you can see, the biggest content players stand out. The red hue also shows us who has community value. Notice how Siripala Bot is pumping out content but is gray, because nobody’s replying to him?

Now, it’s possible to add a filter that weeds out all but the biggest tweep, and relax the criteria from there until one by one, the top ten players of the #PresPollSL emerge: 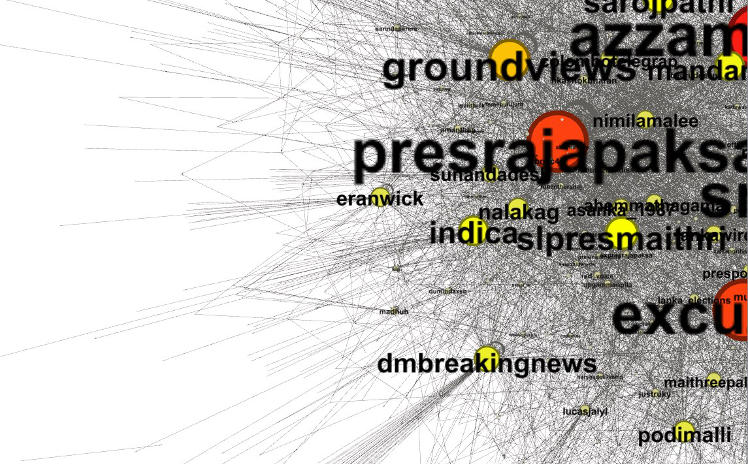 As you can see, thousands follow in their wake, but these people are undoubtedly the kings of this particular hill; others emerge with progressive magnification.

But what of the misspelled hashtag?

#PresspollSL, returned 4,660 tweets.  Not a lot, considering the 18,000 sample space of the previous, and one expects analysis to be simpler. Unfortunately, this happens: 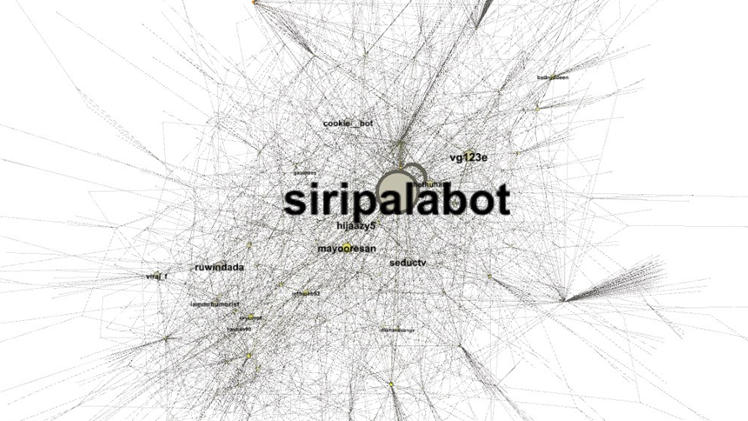 Yes. Siripalabot, who’s been tuned to watch the election hastags, has been retweeting everything. That’s a massive amount of outbound traffic and it’s unrivalled by anything else on this map. The others have very minor engagement compared to #Prespoll. In terms on influence, as the visuals show, these don’t belong with the others; in merging the two all, except for Siripala Bot, would be lost in the oblivion of graph-space.

A case can be made for Siripala Bot winning this particular tourney, by volume if by nothing else. Nevertheless, as we’ve pointed out, content and engagement is the best metric here. The aforementioned Top Ten, then, are ones that’ve really been running the #PresPollSL.