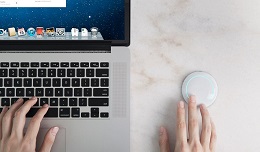 The Internet. It’s big. Okay that’s an understatement. The internet of the modern era seemingly revolves around cat videos, vines dubsmash clips, Facebook wars and tweet-storms. While these in themselves are entertaining, at the end of the day, they are by and large a huge distraction when you want to get some work done.

Enter Saent, a fairly new startup aimed at increasing the productivity of its users using a combination of distraction-blocking hardware and software.

At its most fundamental level, Saent performs akin to how any other distraction-reducing software would operate. Its’ the desktop app blocks out any and all sites and applications deemed unproductive thereby encouraging short term productivity. But that’s not all Saent does.

Saent also has a hardware solution. Smaller than ye average saucer, the device is basically a bluetooth-enabled plastic button. One simply has to pair it with one’s desktop PC or laptop or Mac and press the button on the device. From that point onwards, Saent launches what the company calls a “focused work session.” Each of these sessions is either 30, 50 or 90 minutes long, during which all apps and websites deemed “unproductive” are blocked. An indicator light on the device tracks progress during and fills up as you near the target time.

Saent has also gamified this action with the user gaining points each time you complete a session. From there, you can challenge your friends and coworkers to compete and try to beat your score. The software that is installed with Saent also shows reports on times of the day when you are most and least productive etc. Future developments see the addition of personalized recommendations based on your previous habits

Though available as a standalone app, the real key to success likes in the physical device. A software can be easily forgotten or removed, whereas a physical device would remind you constantly to get your work done.

Funding for the launch is currently being carried out via Indiegogo. The device and desktop apps will be available to backers somewhere around November and the mobile apps will be made available after that. Pricing for the Indiegogo campaign will be $39 will cost between $49 and $69 after the crowd-funding period. The desktop apps will follow a freemium model with subscriptions ranging from $5 to $10 a month.

After all the cat videos and dubsmash clips I end up watching, maybe I should invest in one of these.

Would you get one of these? Thoughts? Comments? We would love to hear from you.