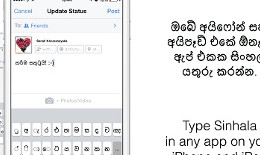 In the latter half of 2014, Apple announced the ability to develop custom keyboards for its mobile devices. Enter Sinhala for iOS – a keyboard extension for iOS that, as you guessed, brings Sinhala language support to all your iOS devices.

Developed by xinterium and Bhagya Silva (of wooroll.com), the app is based on a design supporting standard Wijesekera layout and SLSI 1134 standard character input. It features a algorithm at its core which also makes it easier by identifying natural typing styles. According to the developers, the purpose is to giving the Sinhala typist a best in class experience typing in their own language.

The app can be downloaded via the Apple Appstore and is priced at $12.99 in the United States (and accordingly priced in other regions). We haven’t tried it out yet, but if you feel the need to do so, do tell us how it is.