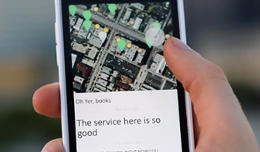 While Facebook did reshape the way we think about identities online by tying interactions to our virtual selves, it did further decentralize and delocalize our social lives.  Sure it’s easy as 1,2,3 to connect with people on the other side of the planet just as it is easy to connect with people across the street.  However, there’s always the price of giving away detailed information of you and your life.

Jon Nash, an artist, and Michael Petruzzo, a developer, have built an interesting little app named “Slight”  to get around the crazy obsession Facebook has with invading our privacy. Aptly named, Slight stubbornly rebels against Facebook’s insistence on linking a username to a face. According to the Los Angeles based duo, Slight is going to be the next big thing when it comes to anonymous social networking.

Instead of helping us talk to people wherever they are, SLight’s ambition is to give us new ways to communicate with people in our immediate neighborhood. Upon opening Slight, you’re instantly taken to a user friendly map view of your surrounding area. No sign-up or login needed. Colorful pins are used on the map to mark virtual conversations that happened at the respective locations.

You can brush through messages left anywhere in the world, and affect the size at which they’re displayed, the prominence they receive by giving them either a “plus” or a “minus” vote.

If you ever send out a message, it gets attached to your location at that very instant. A neat little thing about this is that if someone leaves a message within a forty-meter radius of where you’re standing, you get a push notification. As a result, Slight is a mix of two things: a GPS based chat app when there are other users around, and a sort of spyglass onto other anonymous conversations around the world when there aren’t.

The concept was born out of a scenario we’re all too familiar with: Nash was stuck at a boring presentation and found himself wondering if the people sitting around him felt the same way.
While he did have the tools that would let him broadcast his thoughts to nearly everyone he’d ever met, there was nothing specific to catalog his observations for those nearby.

At that very moment, he started working on a spectrum for discussion but differentiated by its location as its sole organizing factor.

Slight inevitably becomes different things in different places. At a restaurant, it might be used for leaving an off-the-cuff review on a particular burger. At the library, it might be used to flirt with someone sitting a few shelves apart.
Hell, you can even use it to let people know that the tickets for a movie screening just sold out.

Slight has yet to catch on in Sri Lanka, but it’s truly unique spin on social networking – one that cares less about who you are than where you are. It has interesting parallels to the HAN (Human Area Networks) concepts that were being floated a few years ago. Whether Sight goes as huge as the big three – Facebook, Twitter and Instagram – remains to be seen, but it may very well be one of the most unique chat apps we’ve seen for a long time.