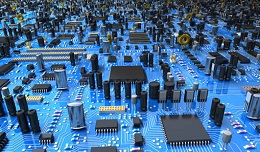 Let’s look at the context. Unnamed miscellaneous “some countries” aside, developing countries have often been indirectly used as e-waste dumps. Remember the booming secondhand PC market that abounded some years ago? Many foreign companies found it more profitable to ship their discarded PCs to Sri Lanka. But this was never a case of countries intentionally trying to use Sri Lanka as the Trash Can of the Indian Ocean – rather, it was a cycle in which everyone profited. Dealers found it profitable to bring down these secondhand PCs, refurbish and sell ‘em: customers found it cheaper to buy a branded, secondhand refurbished PC for cheap. When they died, they would be…tossed.

The problem is far larger than these words make it sounds. A 2009 report titled “Recycling – From e-waste to Resources” by the United Nations Environment Programme and released in July 2009 pointed out that around 40 million metric tons of e-waste are produced globally each year, and about 13 percent of that weight is recycled mostly in developing countries including Pakistan, Bangladesh, India and Sri Lanka. About 9 million tons of this waste is produced by the European Union. That was then. This is now. The problem has only gotten worse.

… to ban import of computers and mobile phones used for more than three years,  a technical committee report would decide whether it should be three years or two years.

Discussions are being held with computer and mobile phone importers to obtain their cooperation and the Minister said that the decision would be gazetted within two months. He reiterated that this would be effectively implemented with the cooperation of customs who would be informed to prevent individuals from bringing in old items…

Finally. Solid progress. While two years might be cutting it a bit too close, a lot of systems inbound to Sri Lanka are very old. Very. We live in an era where Core i5s are the norm, and one still sees old Pentium IV computers being sold as “directly imported from Japan/Australia” on every edition of the HitAd classifieds. These systems are cheap. They work, for about six months to a year. Then, since they’re already so old, parts begin to die one after the other: the user either buys a new computer or replaces the dead parts one buy one. Either way, the junk piles up.

For once, I find myself applauding the government for realizing the truth of what’s building up. For years Sri Lankans – whether limited by budget, or by knowledge – have been buying the discarded leavings off other countries. Once upon a time this was almost essential. However, tech has gotten cheaper and faster, and large adoption has led to a sizeable second-hand market inside the country itself: we’re at a point where those 15,000 rupee systems aren’t needed anymore. They are, for lack of a better word, junk, and should be kept out of this country.